CHRISTMAS means music. Last night our ukulele band performed as part of Volunteer Park’s magical holiday celebration. The Seattle drizzle may have had its way with the thousands of luminaria that lined the park’s paths, but it did little to dampen our spirits and songs. 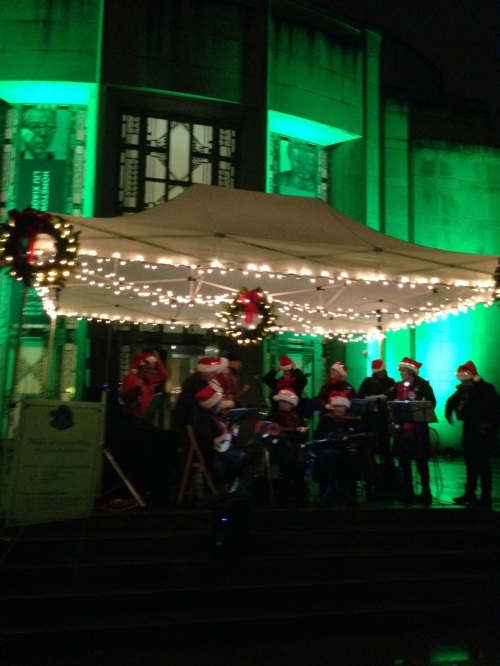 Here we are setting up at the entrance of the Seattle Art Museum.

IN SONORA, California, where I grew up, the yearly tradition is a Christmas Sing in the Courthouse Square. My dad’s newspaper, The Union Democrat, started this event 34 years ago, so I got to design some of the early posters.

ALL my favorite Christmas memories are tied to music:

Like the Christmas we youngest three sibs donned our parents’ bathrobes and paraded into the livingroom singing We Three Kings of Orient Are. (My brother’s rework of the lyrics: “King forever, sneezing never, over us all to reign.”)

And the Christmas when I was a young mother and five families gathered at our house, including Julie and Fernando Larios and their three kids. We staged a Christmas pageant, complete with almost-baby Michael Larios in the laundry basket creche, his little brown boots hanging out over edge.

And the Northwest Girlchoir concert where the choristers processed through the aisles of Meany Hall, singing Dona, Nobis, Pacem all around us.

And the Christmas when my husband and I gave each other ukuleles, unbeknownst to each other and much to our kids’ entertainment. A sort of Gift of the Magi without the irony, Julie Paschkis said. Also without the loss of hair.

IN SEATTLE we’re down to about eight hours of light per day now. As we eagerly await the turn of the solstice, music and Christmas memories fill the darkness.

EACH Christmas, I like to re-read Dad’s Sierra Lookout column about Christmas, first published in 1966. He writes from the perspective of his own foothill town of Sonora. Here’s how it ends:

IT IS NO wonder, then, that in small communities like ours there burns brightly the single hope for all men, brotherhood.

And as we look with agony and dismay upon the storms that may swirl around us, we need not despair.

For along the ravines are heard again the words that say all that can or need be said of Christmas. They are the words of the Christmas angel:

“Glory to God in the highest, and on Earth, peace, good will toward men.”

If I could, I’d sing that with you.