And it was just right… The Rule of Three.

Three blind mice. Three little pigs. Three wishes. Most of us have figured out that three is a magic number in western culture. One theory has it that three is magic to us because that’s the triumvirate of family. That most basic mystery of man and woman equals child.

So we get three coins in a fountain. The three-act play. Three guesses. One-two-three go! Somehow, for whatever the reason,  three feels just right to us.

Let’s look at some examples.

Here are the first few pages of “Lily’s Purple Plastic Purse” by Kevin Henkes. He works with three and variations of three to give his prose just the right rhythms. 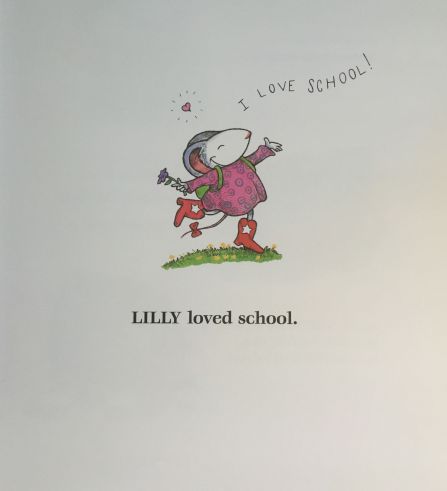 She loved the squeaky chalk.

Lilly loved the privacy of her very own desk.

She loved fish sticks and chocolate milk every Friday in the lunchroom.

And most of all, she loved her teacher, Mr. Slinger.

Mr. Slinger was sharp as a tack.

He wore glasses on a chain around his neck.

And he wore a different colored tie for each day of the week.

“Wow,” said Lilly. That was just about all she could say. “Wow.”

He thought that desks in a rows were old-fashioned and boring. “Do you rodents think you can handle a semicircle?”

And he always provided the most tasty snacks—things that were curly and crunch and cheesy.

“I want to be a teacher when I grow up,” said Lilly.

“Me, too!” said her friends Chester and Wilson and Victor.

Henkes is all over the Rule of Three here.

His first line is singular and definite. Lilly loved school.

Henke is using the power of one. One subject, one verb, one object. One sentence on the page. And then page turn.

Now he’s going to convince us of that singular declaration. So no paltry two or three examples. He lists six things that Lilly loves about school, ending with the most important: Mr. Slinger. Lilly really, really loves school!

And just how cool is Mr. Slinger. He’s not two or three kinds of cool. First he’s four kinds of cool. Before Henke’s breaks his pattern. At which point, all Lilly can say is “Wow.” 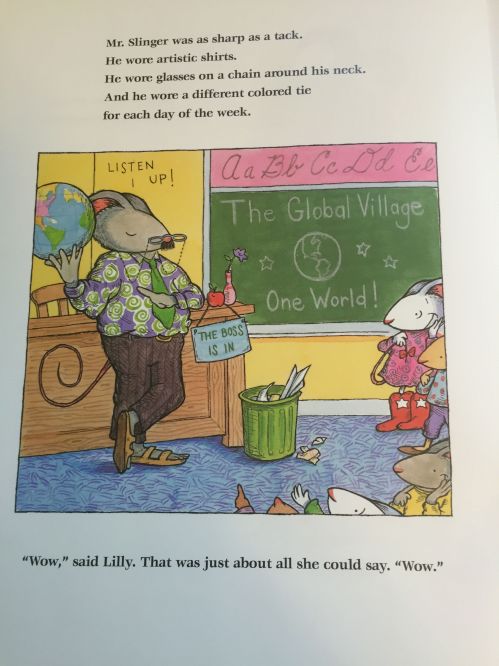 Then he’s three distinct kinds of cool. He’s cool in how he says “hi” in the morning. And notice that Henke gives three ways of saying “hi.” Then he goes into a different kind of sentence construction because he’s been playing with numbers a lot and we just get a straightforward declaration about how Mr. Slinger likes his room set up.

But then it’s back to numbers. His snacks are the best in three distinct ways. And Lilly doesn’t have one friend or two friends, but three.

It’s important to be aware of the moments in which you break from a pattern. Let’s go back to those pages about how cool Mr. Slinger is. First we get four quick examples. What if Henkes had gone on to five or six quick examples in a row. Maybe it would work, but there’s a good chance it would have gotten tedious and you, the reader, would have stopped absorbing the information.

And now he goes into three more examples. Why not two or four here? Because he’s about to end this sequence, this line of thought, and he wants it to feel “just right.”

You can work with the Rule of Three, not only in how you structure the rhythm of your prose, but in the structure of your story, as well.

I was very aware of the rule of three in my book “A Visitor for Bear” where Bear doesn’t want visitors, but a pesky mouse keeps showing up, pleading to be allowed to stay and join Bear for tea and cheese.

I wanted Bear to really feel the pressure of this persistent Mouse. So, of course, I didn’t have Mouse pop up three times before Bear changes his mind. I didn’t want this to feel “just right.” I wanted it to feel extreme, so I had him show up one way or another five times in a row before Bear cracks.

Why not push it? How about six times? Actually I did have Mouse show up six times in my original draft, but the editor, rightly, felt it was too much. That one extra incident took the story from funny to starting to feel repetitive and tedious.

Many, many picture books or other simple stories (particularly folk and fairy tales) will have the hero (one of three brothers, of course) try to win the princess’s hand or discover Grandma’s true identity three times, before the plot turn. The fourth try being the one that works or that reveals the secret.

If your story is for the particularly young child, the third time might be the charm. Three tries with the third one being the successful one.

How exactly to play the numbers game is ultimately a matter of instinct, trial and error, and style. But you have a head start if you work your prose and your story line knowing the magic of three.

P.S. I’m conducting a picture book workshop, The Secret to Writing Great Picture Books, in Spokane on April 22, 2016 through the local SCBWI. It should be a blast and I think you’ll come away with a great start on your own picture book. Find out more about it here: https://inlandnw.scbwi.org/events/how-to-write-a-successful-picture-book/

13 responses to “And it was just right… The Rule of Three.”