So, it’s Wednesday night, I’m in Massachusetts visiting friends, and I go to sleep wondering who might be named this year’s winner of the Nobel Prize in Literature. Maybe the perennial front runner, Haruki Murakami. Maybe the playwright, Tom Stoppard – wouldn’t that be wonderful? Maybe a poet…Paul Muldoon? Maybe (and most likely) someone I’ve never heard of, barely translated into English yet. And then we’ll all have to wait while American publishers scramble to get the work translated. This is what I fall asleep thinking about.

When I go out sleepy-headed in the morning to tell my friends good morning, one of them tells me that Bob Dylan has been named the Nobel Prize winner, and I smile because I think that is a sweet and silly little joke, and she says, “No, really, Bob Dylan won the Nobel Prize.”

This is so far off the grid of possibilities I think I might be dreaming. Or maybe it’s a Let’s-Pull-Julie’s-Leg kind of moment.

I laugh again. “No, really” I hear her say again. I laugh again. But it begins to register. This is real. This is a fact. Bob Dylan has won the Nobel Prize for Literature.

Now…I have always and forever loved Bob Dylan. My whole senior year of high school I listened to his records late at night in my bedroom when I was supposed to be asleep. I loved everything he wrote. But my first reaction to my friend’s news was, “But he’s a songwriter.”

A fine songwriter, a wonderful songwriter, working old traditions into new ones, singing to us as Americans about who we used to be, who we are, what we face, and providing us with lyrical reminders of those things. But…BUT…the Nobel Prize? I thought about Seamus Heaney, Alice Munro, J. M. Coetzee, V.S. Naipaul.

Then a friend read me the beginning of David Remnick’s celebratory essay in the New Yorker:

God is a colossol joker, isn’t She?

We went to bed last night having learned that the Man Who Will Not Go Away was, according to the Times, no mere purveyor of “locker-room talk”; no, he has been, in fact, true to his own boasts, a man of vile action. The Times report was the latest detail, the latest brushstroke, in the ever-darkening portrait of an American grotesque.

Then came the news, early this morning, that Bob Dylan, one of the best among us, a glory of the country and of the language, had won the Nobel Prize in Literature. Ring them bells! What an astonishing and unambiguously wonderful thing! There are novelists who still should win (yes, Mr. Roth, that list begins with you), and there are many others who should have won (Tolstoy, Proust, Joyce, Woolf, Nabokov, Auden, Levi, Achebe, Borges, Baldwin . . . where to stop?), but, for all the foibles of the prize and its selection committee, can we just bask for a little while in this one? The wheel turns and sometimes it stops right on the nose.

Okay, I thought. Permission simply to “bask.” And I’ve been doing just that. Bob Dylan won the Nobel Prize in Literature. Unbelievable!  Read Remnick’s essay (link here) and think of the reasons why Dylan won. You can believe it’s believable, and you can bask. 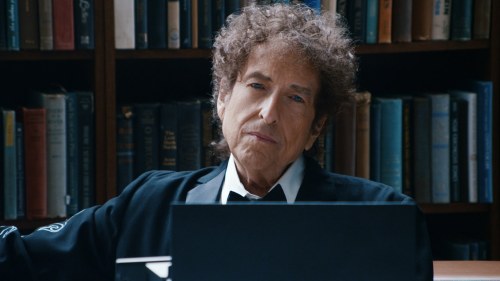 Today’s Poetry Friday round-up is being hosted by Irene Latham at Live Your Poem. Head over there to see what people are sharing.

And to read an exuberant celebration of Dylan’s prize, take a look at Jama Rattigan’s Alphabet Soup.