Last month I confessed to a bout of nerves before starting on a new picture book project. I have gained some calm as I have delved into defining the imagery for the book. I am no longer on the shore. I am wading in.

Of the two primary characters in the book (a dog and a child), it is the dog that I have been working on the most so far.

I have a dog. He is a rat terrier. My initial drawings for Lily were based on him. 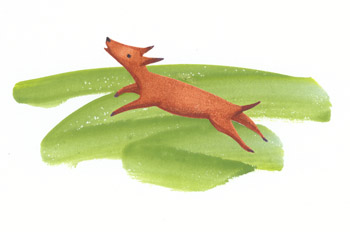 But they were rejected for not being cute and cuddly enough. I admit, Nik is a bit angular and bony and he doesn’t have much of a tail.

So I drew a dog very unlike Nik; a furry pooch with a more expressive tail (as I showed you in my last post).

That Lily thankfully got the go-ahead.

Even though Lily the dog appears in less than half of the imagery, I want to be sure of what she looks like and how she moves. The best way for me to do this is to draw lots of character studies. This is how I familiarize my brain with characters so that I can draw them without having to actually see them. I mostly draw characters from my imagination and then seek reference to augment the drawings. It may seem like an ass-backwards approach, but it’s how I feel most comfortable working.

I have drawn a lot of children. Usually I do about five to ten studies per character before starting on illustrations for a book. But I have not drawn a lot of dogs, so I set myself a goal of one hundred Lily drawings. Here are a few of them.

After I had drawn about seventy imaginary Lilies, I thought it was time to find a real dog to look at. Then one day, while walking in the park with Nik, I met Romeo.

I introduced myself to Romeo’s family and they let my take photos of him. Those pictures helped get me up to my three-digit goal. 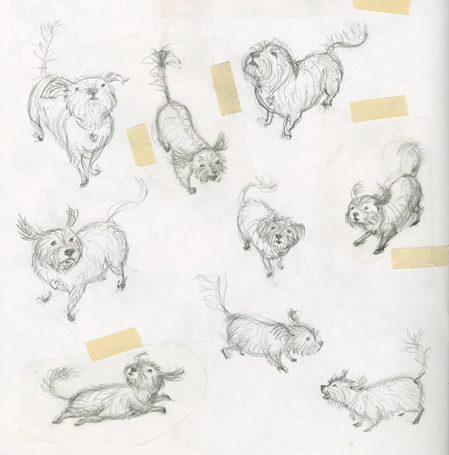 Now I feel like I know this Lily. She becomes more real to me, each time I draw her.

15 responses to “One Hundred Lilies”