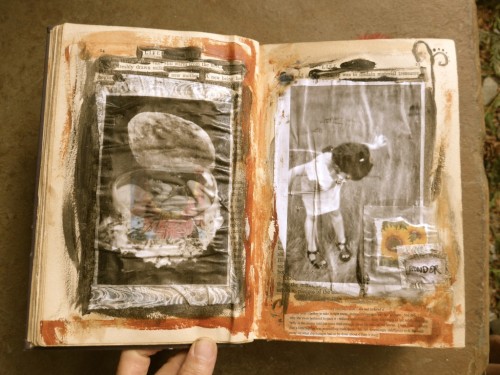 I took an “altered books” workshop the other day, led by the muti-talented Bellingham artist Debra Goldman.  It’s clear to me that altering my book will take a long, long time, because my approach to creativity seems to be so verbal. What I want to do is push myself into more visual territory, and that’s going to be a challenge for me; it will take real pushing…and maybe more than one workshop session. But I imagine many moments of surprise ahead, and surprise keeps a writer — and most artists, I believe — attentive.

My inspiration – my models – were two books, one by Tom Phillips titled  A Humament, and the other A Little White Shadow by the poet Mary Ruefle.

A Humament is filled with pages where most of the text has been painted over, leaving only words that Phllips conceives of as a new narrative. He used a forgotten 19th-century novel titled A Human Document, written by W. H. Mallock, and “plundered, mined and undermined its text to make it yield the ghosts of other possible stories…which seem to lurk within its wall of words.”  The text of every original page has been painted or transformed in some way, leaving only the words Phillips chose for his “alteration.” Here is part of one page looks like:

So the text which descends down the right-hand side of the page reads “memory, turning seventy, renewed with a muse of quaint treated news.”

Another page, which lets quite a bit more of the original text show through, looks like this: 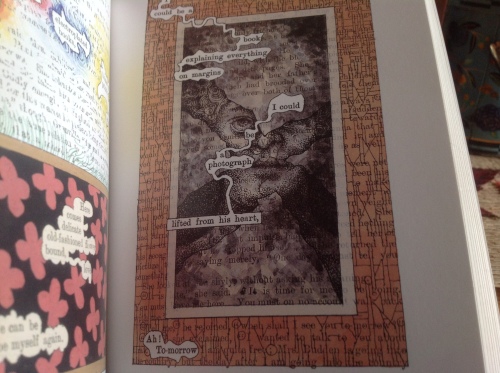 It reads, “I could be a book, explaining everything on margins / I could be a photograph lifted from his heart, /  Ah! Tomorrow”.

Mary Ruefle’s book, A Little White Shadow (the original 19th-century novel’s title was used), is equally interesting: only 56 pages long, it’s more like a chapbook of selected pages from the original (Phillips’s book is small but hefty – 368 altered pages!) The poems Ruefle finds are delicate and haunting, and the sense that these poems represent a palimpsest, a fragment of something washed or scraped away, gives you an extra little shiver. 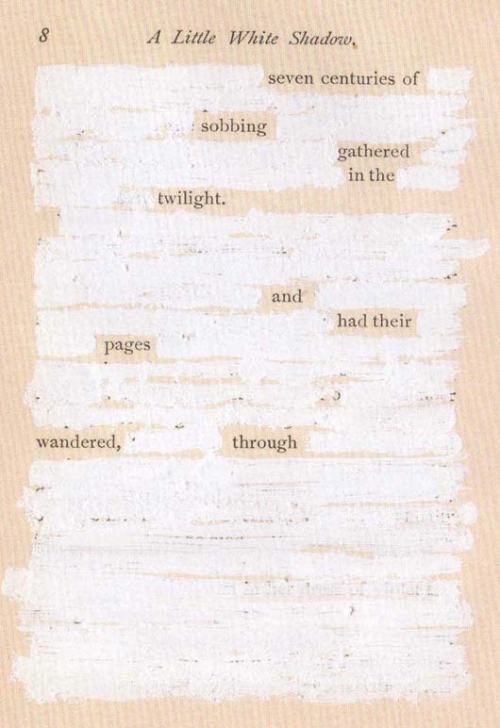 My beginnings are pretty clumsy, but I’m going with the idea of found poems. So far, I’ve cut to pieces the cover of Sandra Cisneros’s book Woman Hollering Creek, eliminated one word fom the title, and added a question mark. My altered book will be titled Woman Hollering? Here’s the unfinished title page:

The found poem on the title page is a little strange, but I tend to like strange:

What they don’t understand
and what they don’t tell you —
in just three paragraphs —
is how a girl can “go bad”
while selling cucumbers,
and why she wants to yell.

That’s taken from the front flap of the cover. The cucumbers on the left-hand page were colored in with green pastels, and the text underneath is gibberish – machine language, not English. Maybe that’s what hollering is? Anyway, I’m having a ball finding the poems within the original text…but the visual imagination is still lacking. Debra Goldman’s suggestions and advise will help, I’m hoping to fill the spaces around the found poems with metaphorically connected images and shapes. We’ll see if I can do it, and I’ll post more about the book/experiment as it develops. Meanwhile, here’s my advice (to myself, as well as to you): Surprise yourself by doing something new. It’s like mental yoga – it stretches you.