Words and Images from the Women’s March

Words and Images. That’s how we convey story in a picture book. Yesterday, I tuned into the words and images that told the story of the Women’s March in Seattle.

It started with how it all looks. I had misplaced the pink pussyhat I knit last year – so decided to wear a red hat my sister Kate sewed me, edged with buttons from my mom’s button box. It was a way to bring Mom and my sisters along.

Then we met a woman on the Light Rail who’d sewn 100 pink fleece pussyhats to give  away. That set the generous feeling for the day. 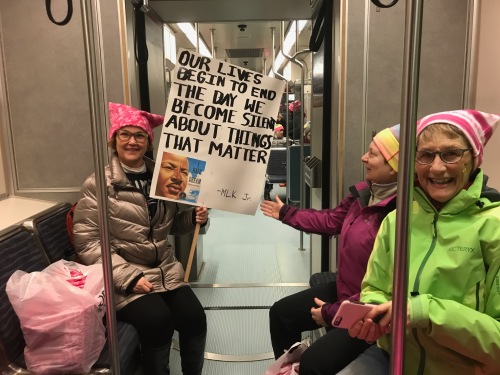 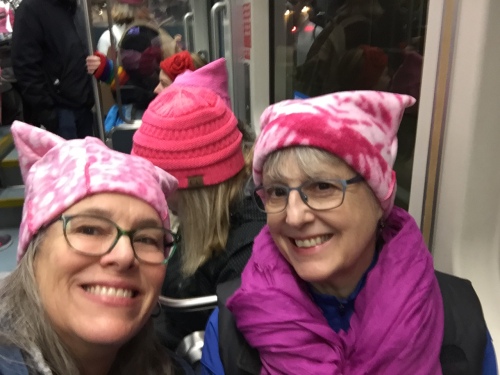 with my friend Suzette

We took the train from the University station. There had been a smattering of pink pussy hats and signs as we descended the escalator into the Light Rail dungeon. By the time we emerged at Cal Anderson park everyone was showing the colors of the movement – which seems to stick to the purple and red side of the color wheel. 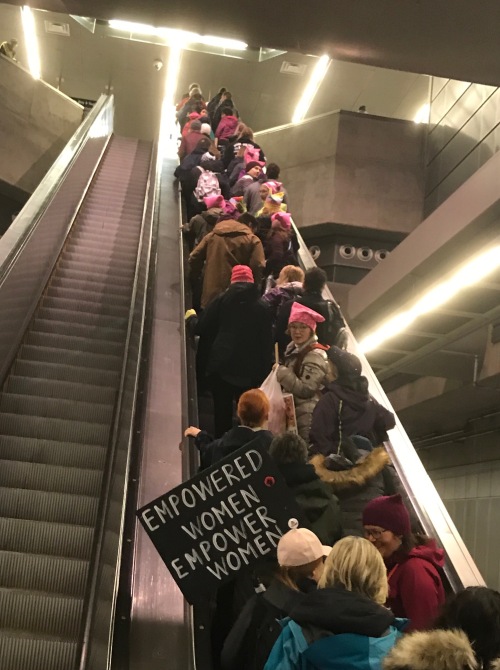 At the park, these two passed out the 1000 buttons they had made. I like the words on mine: strong female character, (especially good for a writer, right?)

Words and images. The Seattle march, which numbered as many as 50,000, was led off by Native Americans wearing black and red clothing, some with button blankets and woven hats. Their drums set a beat of gravitas. Their signs drew attention to the cause of Missing and Murdered Indigenous Women. 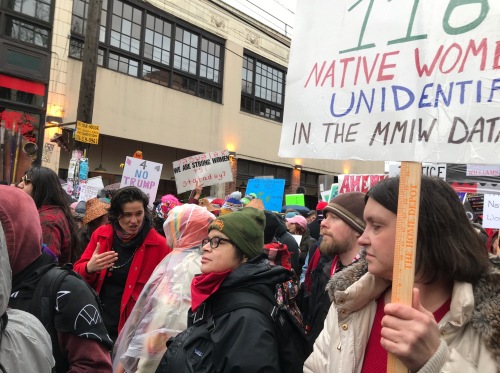 Before we fell into line, a guy with a microphone and camera asked us why we were there. Where to start?

Some of my favorite signs said why. Sometimes with humor, sometimes just pointing to the heartbreaking truth. 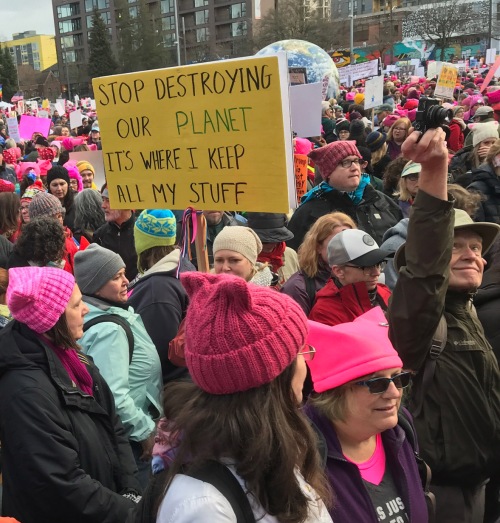 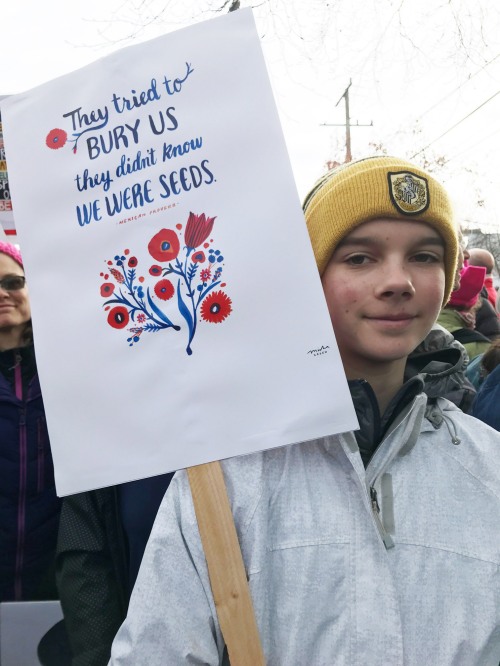 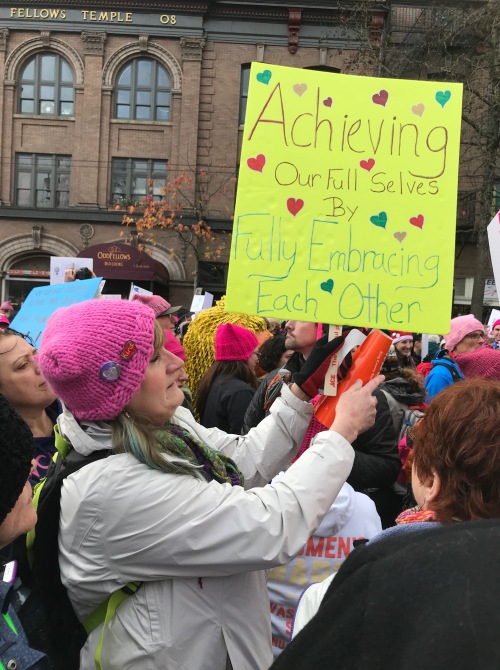 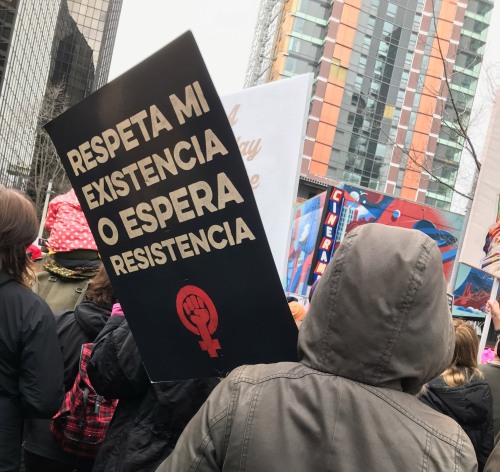 Respect my existence or expect resistance 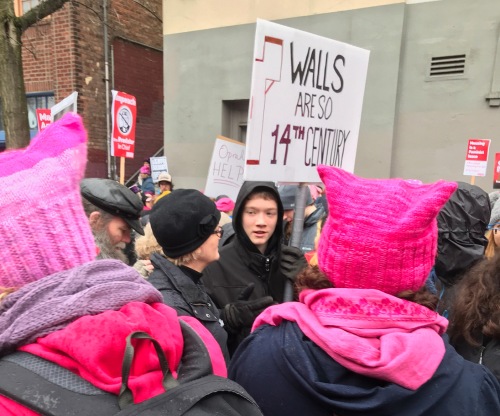 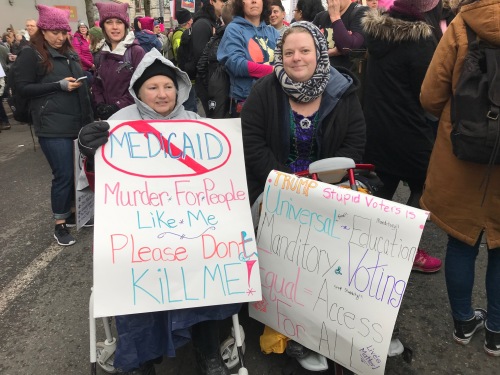 I loved that many of the marchers were men… 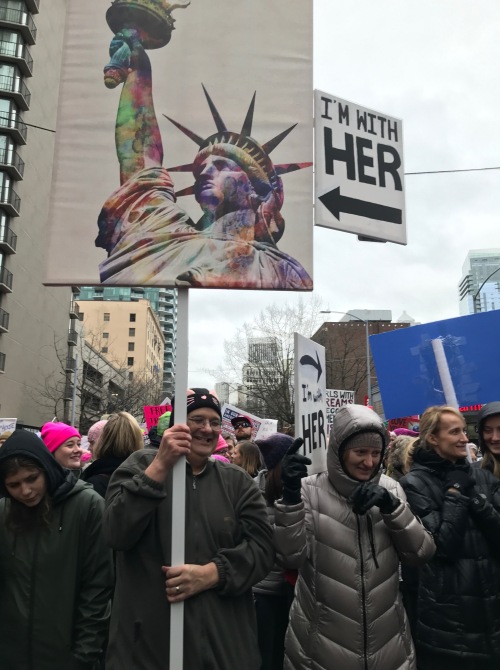 …and that many children participated as well, like this adorable group with Suzette’s daughter and her friends: four moms and seven little ones. When I asked seven-year old Sidney why she was marching, she said, “I want girls and women to have the same rights as men –  because I’m a girl.” 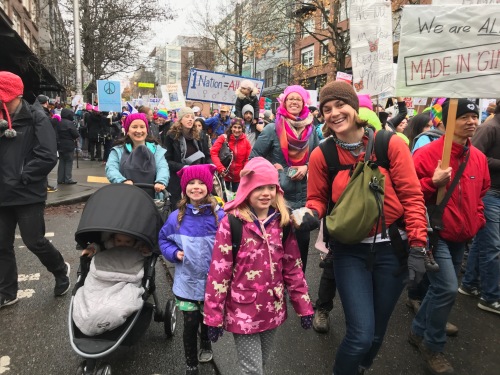 Their future keeps us marching. I plan to hang on to my new pussyhat. This story’s not over.

7 responses to “Words and Images from the Women’s March”