When I learned that Ursula K. LeGuin had died, it came as a shock. I knew she was getting older, but she still seemed invincible to me. I am fortunate to have been one of the many people whom Ursula Le Guin brought into her creative universe. She was very generous in her collaborations. I worked on several book projects with her, and kept in touch over the years. I will miss her.

In the summer of 1982 when I was 20 years-old, I got a call from Todd Barton, the then music director for the Ashland Shakespeare Festival and a former teacher of mine at the University of Oregon, asking if I would be interested in working on a project with Ursula Le Guin and him.

Ursula K. Le Guin. I knew that name. I had read one and a half books of the Earthsea Trilogy in high school, but had to give the set back to my friend so never finished the rest. I figured that I should memorize the author’s name so I could find them and finish them some day.

The reason Todd Barton called a 20-year-old college junior was because he knew I had an interest in scientific illustration (I was pursuing a double major in art and anthropology) and had seen a fair amount of my student work. Ursula had written Always Coming Home, an archaeological study of a culture that “might be going to have lived a long, long time from now” and was looking for someone to illustrate it. She wanted someone young and not yet “jaded” about work. Todd was going to create the music. The book would come in a boxed set with a cassette tape. 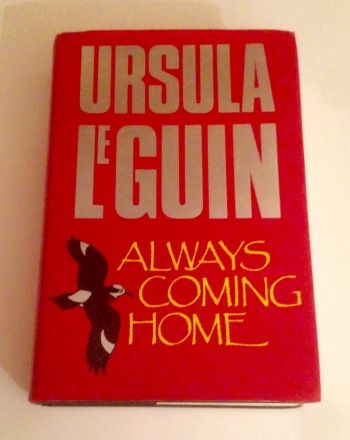 I worked on the book for a year and a half, taking time off from school to complete it. I created 101 illustrations, mostly in pen and ink, but including a few woodcuts.

While I was working on the illustrations for the book, I spent a few weeks with Ursula and her family at her childhood summer house in Sonoma County – the setting for Always Coming Home. I went there to observe, study and draw reference on site for the illustrations.

One day while walking with Ursula on the grassy hills surrounding the house, she bent over and picked up a leaf and showed it to me. The leaf had a beautifully convoluted pattern etched into it by some sort of leaf borer. That was the moment that I realized that she saw much more than I did in the world around me. It isn’t enough to see things when you look for them. You need to look for things to see.

So I want to give Ursula credit for changing my life. Not in the obvious way – by being the first person to hire me to illustrate anything – but on a more personal and fundamental level.

To be open. To notice. To gather. To find.

That is the gift I needed most at the time, and I have carried it throughout my life.

And I still have that leaf.