Category Archives: the business of illustration

Early this month, our Seattle-born and bred children’s book salon, The Inside Story, went international. In nine bookstores across the US and Australia, people who love children’s books gathered for their first-ever Inside Story experience, sponsored by the Society of Children’s Book Writers and Illustrators, aka the SCBWI.

Our goal when we started the Inside Story was to create a forum where authors and illustrators could celebrate their new titles with local booksellers, librarians, teachers and other friends of children’s books. The idea was that book creators would share “inside” information that booksellers and librarians could use to recommend titles. Along the way, we hoped to build our children’s book community. That’s what’s happened over the past 16 years. Something like 500 books have been presented in these twice-yearly programs at a rotating venue of area independent bookstores.

Each time, authors and illustrators are each given three minutes to tell the stories behind their new books. For instance, at the recent Inside Story at Mockingbird Books, we heard Port Townsend illustrator Richard Jesse Watson talk about his latest picture book, Psalm 23. He began by telling about his atheist childhood and ended with a discussion of how he chose the models for his characters. It was interesting stuff.

The timed three-minute segments are interspersed with The Great Book Give Away, a game in which audience members win copies of the new books by answering children’s book trivia questions. The program is followed by schmoozing and booksigning and a fabulous spread of food and drink supplied by the host bookstore. It adds up to a delightful evening.

After the first couple of years, George and I asked our Seattle chapter of the SCBWI if they’d like to get involved. Kirby Larson signed on for the SCBWI and our little community event grew and prospered. In the ensuing years, Meg Lippert, Jaime Temairik, Martha Brockenbrough and Deb Lund have headed the Inside Story for our Seattle SCBWI, each bringing her inimitable style and humor as the event matured.

It was interesting to note that two local authors who presented at the first Inside Story in 1998 also presented new picture books this month: Brenda Guiberson told the story behind her latest, The Greatest Dinosaur Ever, and Nina Laden showcased Once Upon a Memory. 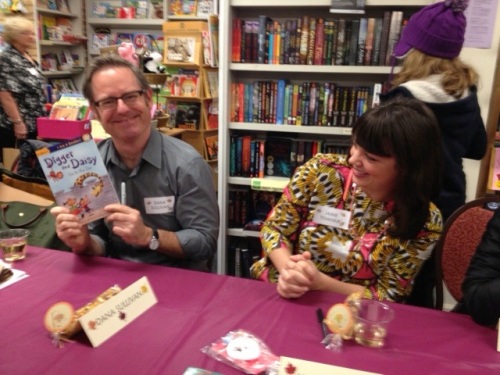 Seattle Inside Story, Nov. 2013: Illustrator Dana Sullivan and his new book, Digger and Daisy, and illustrator Jaime Temairik whose new book is How to Negotiate Everything.

When I think back to those first Inside Story events, Ted Rand is always there. He had a new book in every Inside Story salon until his death in 2005. He was the dean of our children’s book scene – and the only person for whom the Inside Story’s three minute presentation limit was ever relaxed.

I also remember an early Inside Story at Chauni Haslet’s All for Kids Books and Music. We wanted to honor George Shannon, so Eastside writer Mary Whittington’s partner Winnie wrote a song we could sing to him. The music and lyrics were distributed and we all sang to the accompaniment of Winnie’s recorder.

The next day George and I got a note from a writer who had just moved to Seattle from New York. She pointed out that the evening felt more like a Girl Scout campfire than a professional gathering. Oh well. Let it be noted that I believe a community bonds when it sings together.

(One of the international Inside Story events this month was at Bank Street Books in New York. I guess they didn’t include a singalong.)

There’s a gang of school librarians who show up for the Seattle area Inside Storys. Chief among them is Lynn Detweiler, who has attended just about every one. She deserves some recognition. Maybe it’s time to write another recorder-accompanied song?

Lately I am most likely to hear about the publication of new books via a trailer on YouTube that’s friended on Facebook and tweeted on Twitter.  I’m glad that in Seattle we also celebrate these occasions together in person at the Inside Story, as a children’s book community. I love that other cities are going to have this opportunity.

Thanks to everyone who has nurtured the Inside Story along: the SCBWI chairpeople and their committees, the bookstores, the presenters, the audience and the publishers who have sometimes donated champagne (yay, Candlewick). We are all lucky to be part of the Seattle children’s book community.

Every so often I am contacted by someone, a student usually, who is working on a project and wants my input or advice. A few months ago, I got another such request.

The subject line was “small favor…”

I was wondering if you might be able to help me. I’m an illustration major at Brigham Young University and I’m taking a Business Practices for Illustrators class. For that class we’ve been asked to contact an illustrator whose work we admire and who we consider to be a successful illustrator and interview them (either through e-mail or on the phone, whatever works best for you) about their techniques and get their thoughts about the business side of illustrating and how the illustration business has changed in the last few years in particular. This would only be shared with the class, it wouldn’t be published on the internet. Does that sound like something you might be able to help me with? I completely understand if you’re too busy, please just let me know.

In spite of the fact that one should never assume that any favor being requested is “small,” (though I’ve done the same myself – don’t we all wish that the favors we ask of others not be perceived as big?), the articulate and complimentary prose won me over. When I was in college my university didn’t even have an illustration department, much less practical instruction for making a living in the arts. I could have learned a thing or two the easy way if it had.

The questions the student asked were broad but insightful. I tried to answer them as succinctly as possible. I’m including the interview here to perhaps inform others looking for input on the same topics. Disclaimer: I am not an expert, I’m just speaking from my own, personal experience. And this was my opinion a few months ago. My ideas might be quite different in another year! Feel free to let us know what answers you might have given if asked the same small favor!

Q: From your point of view, how has the illustration industry changed in the last decade or so (if at all)?
A: It changed significantly in the ’90s due to the proliferation of online stock images for sale. The effect of technology advances has made it easier for non-illustrators to create images using software like Photoshop and Illustrator. It also has changed the style of illustration, as technology has made some techniques possible that would have been too difficult to produce manually. The market has gotten narrower. Fees have gone down or stayed stagnant for many. Clients expect quick turn-around, with availability 24/7.

Q: What do you do differently now than then?
A: I don’t work as a commercial illustrator much anymore. I have focused on children’s books, so I am not really active in the market these days. Children’s books are a smaller arena on which to focus.

Q: What do you see happening to the industry in the next decade?
A: Things will continue to tighten, I imagine. It will be harder for illustrators to keep rights when negotiating. Clients will want more for less.

A: I am a printmaker, working mostly with relief printing methods. I do use software to make alterations to images after I have completed them, but only to fix flaws or assemble pieces that would have been too hard to create manually (such as placing very small figures in a full spread – in that instance I might create the art for the figures separately at a larger scale so that I can get the detail in, and then digitally reduce them and place them into a scan of the background image afterwards). The ability to fix things after the fact has removed some of the stress of making images for books. For example, if a glob of ink gets on an image as I’m printing something, I don’t necessary have to print the whole thing over again, I can make the repair in Photoshop. Also, if the editor requests a change to an image after I’ve turned in all the artwork (a situation I always try to avoid) I can make the change and alter the finished art digitally and not have to reprint the entire piece.

One down-side to technology that I’m aware of these days is that artists who create digital images can work much faster than I can. Some art directors and editors have come to expect that.On the other hand, digital art often lacks evidence of the artist’s hand. There is too much control of the medium. It’s too easy to be slick. There is no opportunity for happy accidents which is why I like the process of making my art by hand.

I am an old-school craftsperson at heart. I enjoy getting my hands dirty,  and doing computer graphics requires too much time sitting on one’s butt staring at a screen. That’s not my style.

Q: What advice do you have for new illustrators just starting in the industry?
A: Be assertive. Don’t let a fear of failure keep you from trying. Look for inspiration everywhere. Don’t look at your competition for inspiration.

Always work with a contract. Don’t do “work-for-hire.” Keep the rights to your artwork unless the client is willing to pay substantially for a total buy-out and unlimited usage. Run your business like a business. Be polite but be strong.