What I Learned from the 2017 Caldecott Winners’ Portland Panel

Posted on December 9, 2017 by laurakvasnosky | 6 comments

There they were – all five recipients of the 2017 Caldecott awards – seated for a panel discussion in Portland, Oregon. Usually a given year’s Caldecott winners appear together only at their ALA awards ceremony. But shortly after these winners were announced last January, my friend, Portland librarian Marian Creamer, who served on the awards committee, realized all five of the 2017 recipients had a connection to Portland. So she hatched a plan to gather them for a wonderful few days of events in her corner of the world.

Here are some remarks from these illustrious illustrators that stuck with me. 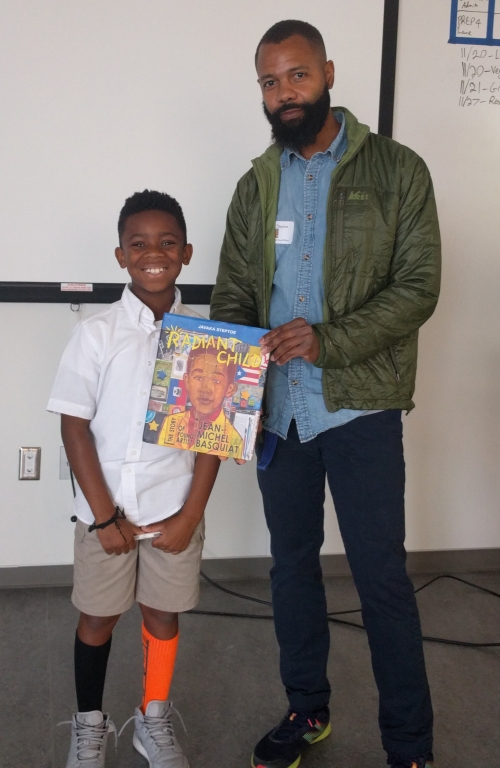 First off, Javaka Steptoe whose book, Radiant Child, the Story of Young Artist Jean-Michel Basquiat, was given the top Caldecott medal. His illustrations were created in the style of Basquiat’s work: painted and collaged onto found wooden panels with repetition of iconic Basquiat images in Basquiat-bright colors.

Javaka said he begins his projects by looking for the story behind the story. For this book, it was the mother/son connection that spoke to him, “the basis of Basquiat’s humanity.” In the first stages of any book project, Javaka advises, “Let it be ugly: throw it up on a page, put it all out there, then scale it back.” His goal is to find “a balance of flavors.”

As he works through successive drafts, Javaka finds “better words and flow out of the chaos and jumbledness.” He concluded, “Put the work in – and also realize you have to give it up eventually. You gotta let it go.”

Javaka first visited Portland 17 years ago and “looks for any excuse to return.”

Next up, the four Caldecott honors. 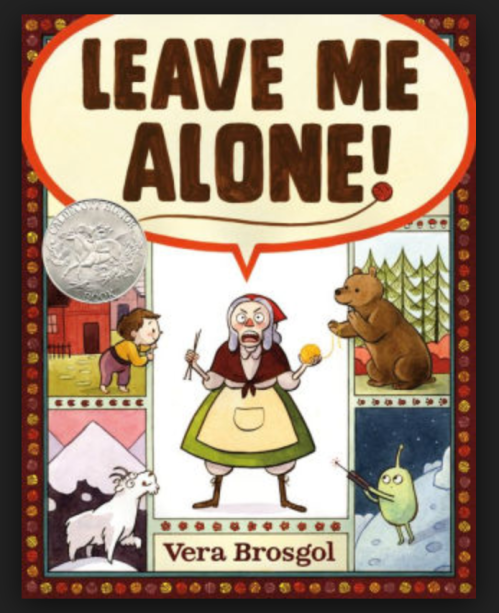 Vera Brogsol scored Caldecott honor recognition with her first picture book, Leave Me Alone, the tale of a grandma who yearns for a place where she can knit in peace and quiet. Born in Russia in 1984, Vera came to the US at age five and worked many years in animation. Like the babushka in her book, she relishes time alone and the opportunity to work on her own projects.

Vera emphasizes she works slowly. “Projects become a part of you, like a limb.” She looks for projects that will challenge her, to help her grow and understand herself.

Vera’s fellow Portlander, Carson Ellis, author of Du Iz Tak, is flat out inventive. This is a book written in a language spoken by insect characters; a language made clear by repetition and context. The illustrations move the story along with delightful surprises at each page turn. Carson is the mother of two young kids and wife of indie musician Colin Maloy of the Decemberists. She keeps a slush pile of pieces that she revisits to see if any of it “can go anywhere. Everything I do is over-complicated and I have to simplify.” She circles back to the slush pile to see if any ideas are ready to “flesh out properly.”

Gregory Christie and me.

Greg Christie spent three months painting in the Portland arts environment, in the time before he opened a bookstore/gallery in Atlanta. His book, Freedom in Congo Square, recounts a chapter of slave history in New Orleans. The rhyming text by Carole Boston Weatherford, tells of the slaves working day by day, leading to a Sunday gathering for dancing and music in the city’s Freedom Square.

“Anywhere you go in the US, New Orleans is unique,” Greg said. “Its unique urban energy was forged in African American culture.” Greg has illustrated over 60 children’s books and lots of album covers as well. He used a combination of collage and acrylic gouache on this one. He paints his final art over a loose sketch. “I like to give myself room to keep energy in the painting.”

His reason for creating children’s books? “I do these books because I want there to be books I wish I had as a child.”

Brendan Wenzel is based in Brooklyn, NY, but his book, They All Saw A Cat, came out of his experience of living three years in SE Asia. The illustrations reveal the ways that various creatures (flea, snake, mouse, skunk etc.) see a cat, as well as how the cat sees itself. Brendan says he was aiming to “create a sense of healing through understanding our different perspectives.” That is exactly what these illustrations do. Also, this book has my favorite first line, “A cat walked through the world, with its whiskers, paws and ears.”

The Caldecott 2017 panel was introduced by students from Grant High school and Riverdale Elementary and moderated by Steven Engelfried, Library Services Manager, Wilsonville Public Library. In the following days, the five visited Faubion PK-8 school in NE Portland and worked with students on art and writing projects.

I met Marian Creamer – who dreamed this up and made it happen – about 20 years ago when she was a school librarian at Riverdale Elementary and I a visiting author. Though she is retired from her school library, she continues to work tirelessly to bring kids and books together.

Marian was struck by something she gleaned from these five Caldecott winning books as a whole: “A multiplicity of viewpoints can coexist, and differences of perspectives are evident without preaching. Children are the best judges of discerning what is true and relative.”

Marian’s non-profit organization, Children’s Literature Alive, sponsored the Portland events. If you would like to join me in supporting Marian’s work, leave a note in the comments and I will send you her contact information.