Two years ago I wrote about my deep appreciation for my local library in Seattle. Now I live in London, where public libraries as we now know them got started.

Founded in 1753 as part of the British Museum, The British Library is the grandmother of them all. It was originally intended as a kind of national museum created to build on its initial collection of books, manuscripts and prints. Over time, as it’s collections increased to include drawings, scientific materials, maps, music, stamps, coins, periodicals – anything printed with historic significance – it became clear that it needed its own facility to house and exhibit its treasures. The current British Library was formally opened in 1998 near St. Pancras station.

In planning my first visit to the British Library, I scheduled myself a (free) tour of the Conservation Center. There, I saw the staff working on a number of current projects: preparing 19th century maps for an exhibition in India; repairing the disintegrating bindings of letters of state from Oliver Cromwell’s era; building boxes for a Franz Kafka award for magic realism and a torch from the 2012 London Olympics; mounting original, handwritten lyrics by John Lennon. Sorry, no photos allowed, but I did take pictures of some of the Royal binding stamps in the hallway. 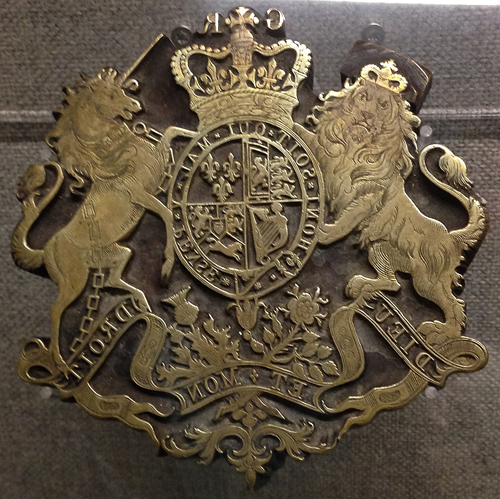 I also visited the library’s permanent exhibit on the first floor. There it displays some of its most impressive treasures. These include a Gutenberg Bible, pages from Da Vinci’s notebooks, and Shakespeare’s first folio. The Magna Carta is usually there, but it is off display for a future exhibit. Some of my favorite items there are: Jane Austen’s writing desk; a page from the 11th century Beowulf poem; a letter from Anne Boleyn and Henry VIII to Cardinal Wolsey, dated 1528; a Kufic Qur’an from AD 850;

The Guthlac Roll, a 12th – 13th century scroll showing events in the Life of saint Guthlac of Crowland;

The various scripts and handwriting were fascinating to see all in one room. From Florence Nightingale’s wispy report on her nursing staff in the Crimea (1854-56), to John Lennon’s lyrics for “A Hard Day’s Night” scrawled on the back of a birthday card for his son, Julian. Sorry, no photos here either.

In the center of the building is the King’s Library, a towering glass-encased structure that houses the foundation of the library – King George III ‘s book collection. It consists of 65,000 printed books and 19,000 pamphlets from Britain, Europe and North America from the mid 15th to the early 19th centuries. I guess he was a bookish sort of king. 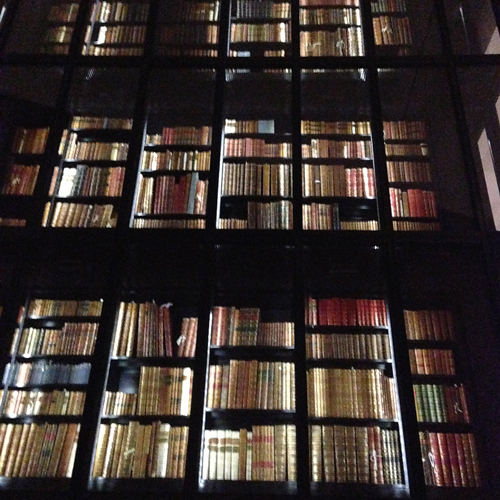 Then there was the “Terror and Wonder: The Gothic Imagination” exhibit which ends later this month. The history of British Gothic literature from its beginnings  in 1764 with Horace Walpole’s The Castle of Otranto, to present day Whitby Goth culture. It appears to be true that Goth with never die.

The items chosen for this exhibit included some I expected, and others I didn’t. I took a few photos of pieces that intrigued me. If there was a no-camera sign posted, I failed to see it… 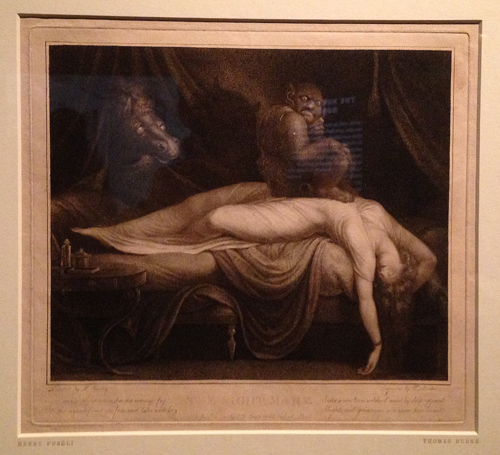 William Blake’s Time “in his character of destroyer, mowing down indiscriminately the frail inhabitants of this world.” 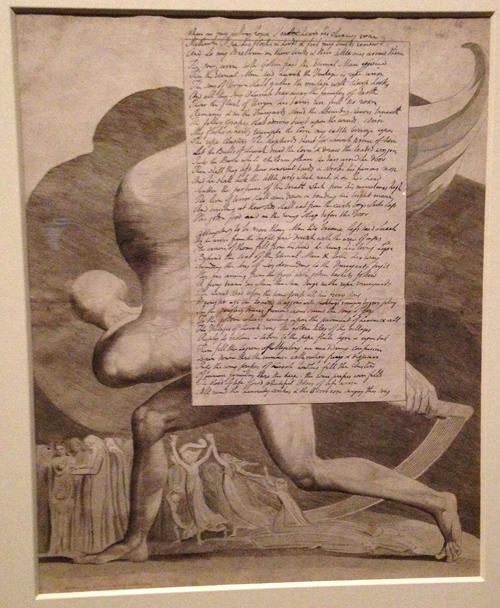 The Wicker Colossus of the Druids from a 1771 travel guide to England and Wales, illustrating the legend that the Druids made human sacrifices by burning people inside giant wicker effigies. Is this where the idea for Burning Man came from?

Caricaturist James Gillray’s “Tales of Wonder!,” (1802) is a satirical look at the excesses of Gothic novels and the “excitable imaginations of those who read them. “

The original manuscript of Frankenstein (1818) by Mary Shelley, with comments in the margins by Percy Shelley.

Arthur Rackham contributed to Gothic literature, as in this illustration for Edgar Allen Poe’s short story, “The Oval Portrait,” (1842). 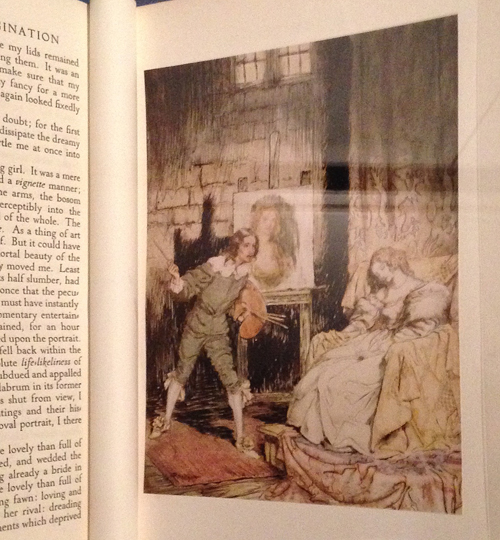 “The Man of the Crowd,” another short story by Edgar Allen Poe, here illustrated by John Buckland Wright (1932). 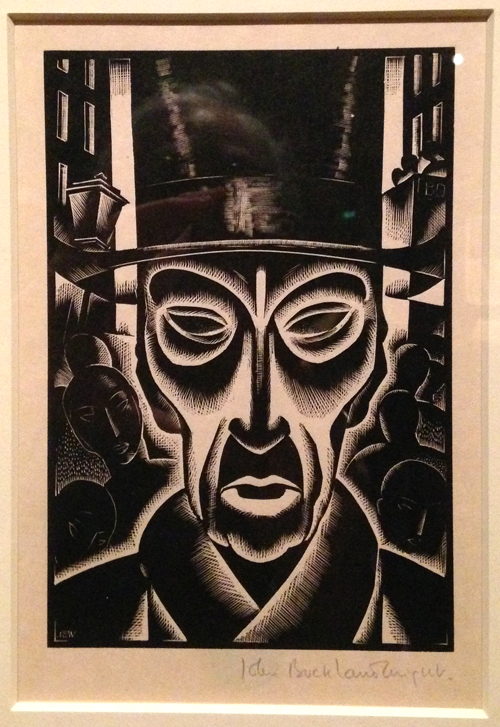 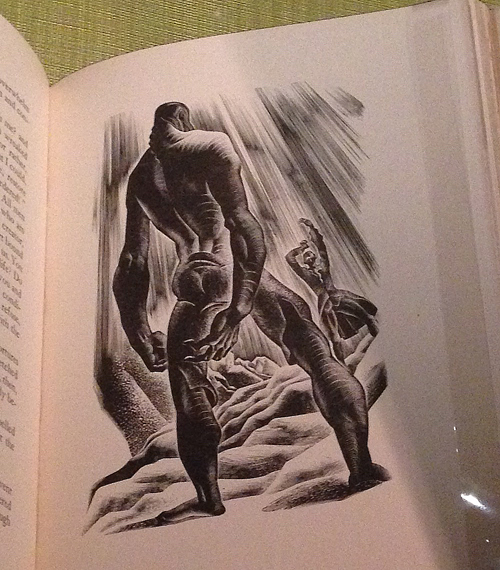 Sir Arthur Conan Doyle’s “The Hound of the Baskervilles” in lurid technicolor!

No Terror and Wonder show would be complete without zombies.

Even Gothic drama has its humorous side. “The Curse of The Were-Rabbit” (2005), is described by co-creator Nick Park as “the world’s first vegetarian horror film.”

I finished my full, bookish day with a round through the British Library Bookstore. I bought a dozen or so postcards to send to my American friends (and some to keep for myself). The world of books is a place in which I am quite happy to linger. If you are a library lover, you will enjoy it too.