I think she’s got it right – better mental health through dancing, singing, being enchanted by stories, and comforted by silence. To which I would add two more questions: When did you stop gardening? and When did you stop hanging out with your dog?

But that story thing. That’s what’s on the plate here today. Stories. From daily incidents – what elementary school writers call “small moments” – packed with meaning and humor and pathos, to the big arcs of a lifetime that spool out of the ephemera of past generations. Through stories, we connect. It is one of my favorite things about being human.

Turns out there is a chemical reason why we find stories so satisfying, according to neuro-economist Paul Zak. Zak measured his subjects’ brains’ oxytocin before and after watching character-driven videos. The oxytocin levels took a definite jump.

His verdict: human beings are “wired for story.”

You know that pleasurable feeling you get from a good story? That’s oxytocin synthesizing in your brain. In further studies, Zak found that the more oxytocin a person released, the more likely a person would be willing to help others, for example, by donating money to charities associated with the video’s narrative. This mechanism will play out repeatedly Sunday in Superbowl commercials whose stories will tug your heartstrings and then your wallet, all in 30 seconds flat.

Zak wrote, “Many of us know from Joseph Campbell’s work that enduring stories tend to share a dramatic arc in which a character struggles and eventually finds heretofore unknown abilities and uses these to triumph over adversity; my work shows that the brain is highly attracted to this story style.”

Zak noted people respond most strongly to narratives with beginnings, middles and ends that used dramatic tension to sustain attention. That’s the basic structure of many Superbowl commercials – but also of typical picture books. Here are some examples from our BATT  group:

Margaret and Julie P’s recent Where Lily Isn’t, the tender story of a little girl struggling with the death of her dog.

Bonny’s The Frightful Ride of Michael McMichael, where a small boy finds a surprising way to deal with a scary bus driver.

My sister Kate’s and my Little Wolf’s First Howling about a wolf pup finding his voice. 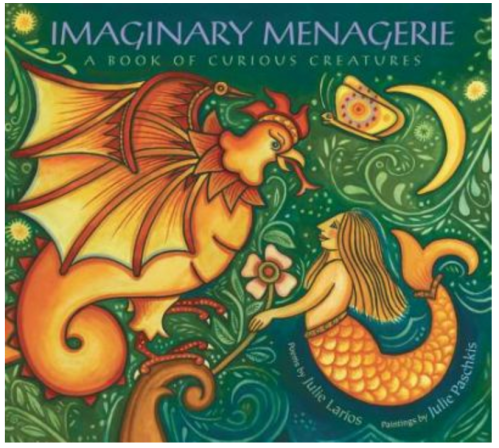 The same story structure is also found in a spare form in this poem from Julie L.’s Imaginary Menagerie, illustrated by Julie P.:

Who will bring me golden apples?

From her silver tree.

Who will sing me a golden song?

All day she waits

In the tsar’s garden.

Who will set me free? Who?

If given a feather

I still wonder why stories have this oxytocin-releasing affect on our brains. Perhaps over the eons, as humans evolved, stories were necessary to survival. I like that hypothesis. Meanwhile, let’s just enjoy the pleasure of good stories, as they spark our ability to connect, to empathize and to make meaning.