This is a story about a search for the right word, and another search, too.

At our last critique meeting, I read my latest version of LITTLE WOLF’S FIRST HOWLING. Bonny suggested I find a new word for “twinkle” in the sentence, “They watched as the stars twinkled on and a full moon peeked over the mountain.”

I have consulted friends and Google, too, of course: blinked, winked, flickered, appeared. What is the word for that moment when a star becomes visible? Maybe blossomed? (No, a friend pointed out, that mixes the plant world and the moon’s anthropomorphic action of peeking.)

I was thinking of this “twinkled” challenge Wednesday night. All summer I have looked forward to the Perseid Meteor Showers, billed as this year’s biggest star event. Wednesday night, August 12, was supposed to be the best for viewing. The new moon would set early and the skies would be very dark. We could expect 80 to 100 shooting stars per hour. Talk about twinkling.

I imagined John and me watching this all from a mountain meadow, far away from the Seattle’s city lights. We’d be ensconced in our butterfly chairs that fold out into chaise lounges. Refreshing drinks would rest in the special cup holders that are built into the chairs’ arms. Our sweet spaniel, Izzi, would rest at our feet. It might be romantic.

So Wednesday afternoon we headed for the Cascades. Just as we cleared the tangle of city traffic, we realized we’d forgotten the special chairs. And the cooler.

At least we remembered the dog.

More challenges were, literally, on the horizon. Low clouds hung along the hills and a haze of smoke blew in from forest fires. After all this effort, would we be able to see stars at all?

Smoky winds sliced through the sliding doors as we stepped out on the balcony of our room in Suncadia Lodge. A smoky haze persisted after sundown but we headed out to find a dark spot away from the Lodge. We chose a driveway apron to a vacant lot and lay down on hard new asphalt to stargaze. Right away, I realized I could see the stars better without my new glasses, so I stuck them in my coat pocket. Several meteors streaked across the sky, but I was sure we’d see even more if we could find a darker spot. I talked John into walking another half mile down the barely lit road and following a string of bistro lights through the forest to the parking lot.

The skies cleared a little as we drove around looking for a dark cul de sac in the unbuilt part of the resort. We found the perfect spot, the kind of place young lovers seek on a warm summer night. Only it was on Rocking Chair Lane. We positioned the car so it blocked the one small streetlight and spread the dog’s old sleeping bag on the still-warm pavement. I folded my coat into a pillow and we lay down with Izzi between us to look at the now fully twinkling skies.

Despite the sky not being completely black, we counted 24 shooting stars over the next hour and a half. Then a local drove by to see what we were doing and we felt self-conscious lying out there in the deserted cul-de-sac on the dog’s old sleeping bag. We packed up. That’s when I realized my new glasses were missing.

Backtrack, Backtrack. Backtrack. Every place we’d been. We combed the dark roads and trails with our cell phone flashlights. No luck. We were bummed as we went to bed, the wind still whistling through the open sliding door. Then at 3 am an alarm on the room’s refrigerator started beeping. Which was annoying until we looked outside. All was calm. The night was perfectly black, the sky sugared with so many stars that it was hard to pick out the constellations. Those stars dazzled and danced. They sparkled and salsa-ed. They even twinkled.

The next morning before I got up, John went out with Izzi. He walked back to that first driveway apron and met a man working on the gate there.

“Did you happen to see some glasses?”

“As a matter of fact, I have them right here in my truck,” he said. “Lucky I didn’t drive over ‘em.”

Maybe now that I have my new glasses back I will see stars in a new way and find that right word. Or maybe twinkled is enough. 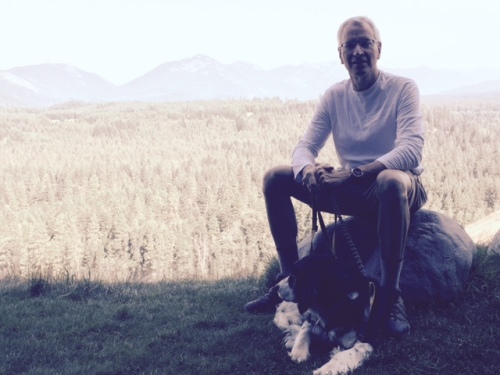 John and Izzi and the hazy Cascades.