Getting Bear to the Library

Those who have followed the adventures of Mouse and Bear may have noticed that Bear has never left his cozy Tudor cottage. He’s barely set even a claw out that front door.

The trouble with Bear is he’s a recluse. 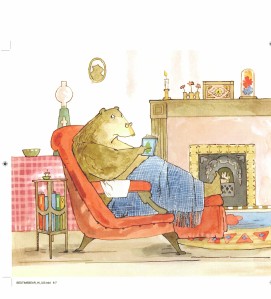 The dynamic is much the same in each book. Bear is a grouchy loner who is reluctantly drawn into life and its various celebrations by exuberant Mouse.

The latest book, A LIBRARY BOOK FOR BEAR is the fifth book in the Mouse and Bear series. The trouble with writing sequels about a character who’s a recluse is how to get your character out and about and into different adventures.

I wanted to talk a little in this blog about how I got Bear into the bigger world and about the challenge of writing sequels.

In some ways sequels are easy:

You know your characters and for a picture book it’s easy to follow a fairly similar story arc once you’ve set one up. The young reader is looking for the familiar and so is the editor. So it’s tempting to deliver the same story over and over with minor variations.

Writing each book is, in some ways, as simple as asking myself “what fresh hell can I create for Bear.”

Fortunately I’ve never had any trouble figuring out different ways to bug Bear. I grew up with five siblings, which pretty much makes one an expert on bugging people.

So I’ve had Bear have to deal with this mouse who won’t go away and with the horror of having a birthday party and with a first ever sleep-over with a guest who isn’t as quiet as Bear requires. Bear gets sick and has to deal with the much too cheerful ministrations of Mouse.

But how do you keep the familiar from turning into a formula? How do you keep it fresh, not only for your readers, but for yourself. I didn’t want Bear to simply be bugged and to respond the same way time after time. I hope to move his relationship with Mouse forward bit by bit through the series. And for Bear to change just a little.

So for this sequel I went through a number of scenarios—Mouse and Bear bake a pie together; Mouse and Bear go on a picnic and Bear can’t settle until he finds the perfect spot. Or they could go fishing. I wasn’t sure yet what would bug Bear about fishing but I know enough about fishing to know there’d be plenty of frustration.

But these all felt like I would cover pretty familiar territory. I did get Bear out of the house in a few of these ideas, but it was still just him and Mouse interacting. I wanted to turn things on their head a bit.

Then I remembered one of Bear’s main characteristics. In every story, he is inevitably driven to bellow out his frustration, rather like Donald Duck working up into one of his tantrums. And that inevitable process gave me an idea. What if Bear were in a situation where quiet was required. A church, some solemn occasion… I was half-tempted to try out Bear at a funeral. I would love to see him bellowing mid-funeral (ideally about some annoyance he had with the corpse.)

But really what better quiet place than a library? And a library would get Bear out of his house and interacting with at least a few other animals

There was a problem with that idea, however, because I love libraries and books. What could Bear possible be grouchy about?

I grew up in a household with hundreds and hundreds of books. There were bookshelves in virtually every room. One room was a library with shelves from floor to ceiling. Even with all of that, we went to the library once a week and I would walk out with books up to my chin.

Libraries have always had a special place in my life. I still remember being the school library aide when I was in the fourth grade. How I loved to turn the numbers on the rubber date stamp to the correct date and decisively stamp the checkout cards.

My mother was on the Wenatchee, WA library board. My siblings and I even created our own library at home taking all the kids books we had and numbering and labeling them and creating library check out card for each.

So how could Bear not be interested in the library!? Fortunately, Bear is so persnickety and stubborn that he was convinced he already had all the books he needed right at home: he had three about honeybees, three about kings and queens and one about pickles. Who could ask for more?

Of course, Mouse knew you could ask for a whole lot more. He just needs to convince Bear of that. Eventually he does (with the help of a friendly librarian and pickles) and Bear goes home with seven new books. And I’m sure with more visits to the library in his future.

I’m glad I got Bear to go to the library. The book is already in its third printing. (It came out in July.) It’s been reviewed in the Wall St. Journal and Huffington Post, along with the usual children’s book review sources.  It received a starred review from the School Library Journal and was selected as an autumn must-read by Scholastic’s Instructor Magazine.

It will be on the cover of American Booksellers Children’s book holiday catalog. Some 275,000 copies will be printed and distributed to independent bookstores nationwide.

What’s next for Mouse and Bear? Having gotten Bear into the frying pan, I’m putting him into the fire next time with A HALLOWEEN FOR BEAR. Imagine how much he’s going to love having all kinds of animals come to his house demanding candy!