Lunch with the Ladies of Mazza 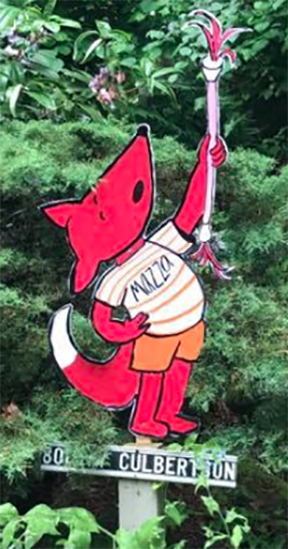 It was a cross between Parents’ Night at elementary school and a rolling party. Parents’ Night because we spiffed the place up and hung my sister Kate’s and my best artwork on the walls. A rolling party because these ladies were primed for a good time even before their big bus pulled up to the bottom of our driveway.

I hung my sister Kate Harvey McGee’s paintings down the hall. Kate illustrated Little Wolf’s First Howling with me and I wanted the visitors to see her pastels.

Last month the Mazza Institute Study Tour landed in Seattle to begin their visits to NW children’s book illustrators’ studios. Most of the tour members were from around Findlay, Ohio, where the University’s Mazza Museum holds an amazing, diverse collection of original artwork by children’s book illustrators. Every summer they take a tour to a corner of the United States and visit illustrators’ studios. Julie Paschkis and I thought why not invite the group to lunch on the first day of their journey? Lunch for 40 on our patio. Why not?

Luckily, fellow BATTerinas Bonny Becker and Margaret Chodos-Irvine, as well as author/illustrator Dana Sullivan, signed on to help. And John, too, of course. (Our other BATT member, Julie Larios, was doing a tour of her own while teaching at Vermont College’s alum retreat.)

We greeted the enthusiastic busload of women and their leader, Ben Sapp, with peach bellinis. Mostly our guests were former teachers and librarians who now work as docents at the Mazza Museum. Several collect children’s book art themselves. Right away, we connected. Picture books matter to them like they matter to us.

Margaret set out the buffet of sandwiches and salads while our guests helped ferry drink ingredients out to the patio.

Over a luncheon prepared by Julie, Margaret and Bonny, we talked books and illustration and illustrators and heard about past Mazza tour adventures. Though we had ample leftover food, the ladies managed to polish off all the Prosecco.

Bonny says we can see the back of her head in this photo. Ben Sapp, John and Julie and I are standing, left to right, in the back. 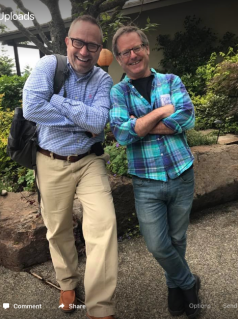 After lunch, our guests toured my studio, viewed artwork, bought books and tried their hands at gouache resist. 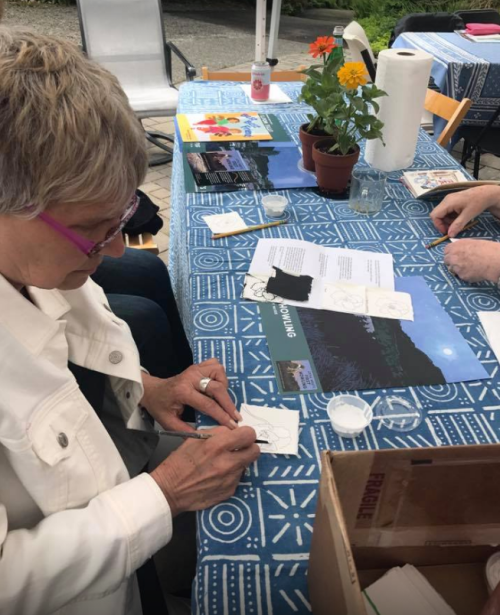 It was a lot of fun. As we walked our guests back down the hill, I had a chance to tell director Ben Sapp how thankful I am that there is a place in this world like the Mazza Museum that values children and stories and especially the art of children’s books. It’s the culture of a world I want to live in. 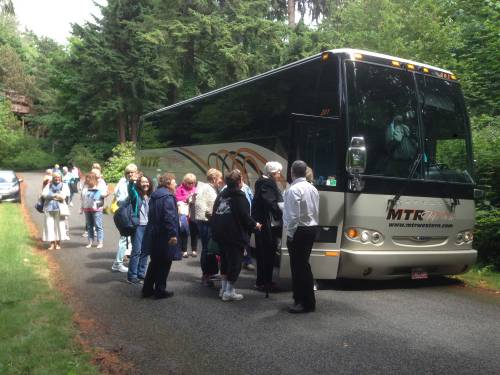 Loading up the bus after lunch and the studio tour. Dana says they rolled away singing “The Wheels on the Bus.”

After the luncheon, as we took down tents and put artwork back into flat files, I thought back. Who would have guessed 25 years ago in Keith Baker’s Picture Book Illustration class, that two of my fellow classmates – Julie Paschkis and Margaret Chodos-Irvine – and I would create a critique group that grew into Books Around The Table, and that over the years together we’d all publish 70? (maybe more?) children’s books AND end up hosting 40 ladies from Findlay, Ohio, for lunch?

It was a memorable experience, but John and I had expected that because my old studio was on the itinerary 10 years ago, the last time the tour came to Seattle. Some of this June’s guests had been on that tour, too.

I hope in another ten years they will roll through again. I’ll have the peach bellinis waiting.