It seems my monthly turn at this blog comes around too quickly. Then I think of my Dad. For 25 years, he wrote a three-times-a-week column that ran on the front page of his newspaper, the Sonora Union Democrat. Three times a week.

A precursor to blogging, Dad’s Sierra Lookout column was a forum for his take on the life and times of his beloved “poison-oakers” in California’s Mother Lode. Dad wrote about his childhood, family, local issues, world news, and rural life, all from the perspective of a self-described “country editor.”

The following column seemed to raise its hand to be included on our Books Around the Table blog because it was written on July 19, 1977. That’s 35 years ago, almost to the day. I think of it as an ode to the Sierra.

WHEN THE insides of your knees are chafed all the way up to the end of your spine.
When anything you sit in seems to lurch and shake.
When the backs of your hands and ears are chapped and sunburned.

WHEN YOU can’t get the smell of fish out from under your fingernails and the smell of smoke out of your clothes.
When the porch railing is draped with an open sleeping bag.
When the air mattress that stayed puffed up only long enough to lure you onto it is on the way to the dump.

WHEN YOU’VE said thanks to Mr. Cutter and his magic mosquito repellant and drained the pollywogs from a glass of Tang for the last time.
When you can smile again without your lips cracking.
When old “Mac” is again munching hay in Willy Ritts’ Kennedy Meadows corral.

WHEN ALL these things are done you lie on that bed that never deflates and remember –
The gentle plunk of the lure on the long cast.
The dart of a shadow from a deep pool, the splash and flash of silver – then nothing.
Or maybe a solid tug – too soft for a snag, too firm for anything but a lunker.

OR VAST ranges of granite pocked by blue jewels with revered names – Black Bear, Bigelow, Emigrant, Dorothy, Maxwell.
And in the folds of rock: lush meadows, green groves, clear streams. Far beyond and below, the grey-brown air trapped in the simmering valley.

SOON forgotten are the lurching chafing and burning of the sometimes rider. Even the memory of Pear Ripple, wet clothes and gin rummy defeats begins to fade.
What remains as clear as the night sky over Bigelow Peak are the steaks, shishkebob and basted eggs by an expert volunteer cook, the sweet meat of camp-smoked trout and the fellowship of others who share an unspoken appreciation of the remote magnificence.

VISITORS to the wilderness are apt to feel some guilt about the privilege, but that’s the paradox of the place. If it were easily available to more, it would soon be enjoyed by none.         –Harvey C. McGee 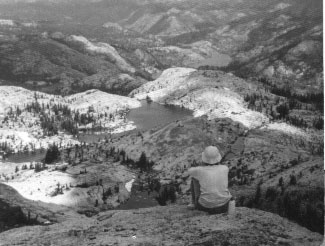 As writers and artists it’s our calling to pay attention and report back. No one sees the world quite the same way. I’m lucky to have my Dad’s columns – his keen observations and amused take on the human condition, his personal stories and opinions – to guide me. Not to mention the gold mine of over 2,500 columns that will come in handy when I’m looking down the trail for a blogpost idea.