Books By The Bay

Posted on September 28, 2012 by Margaret Chodos-Irvine | Leave a comment 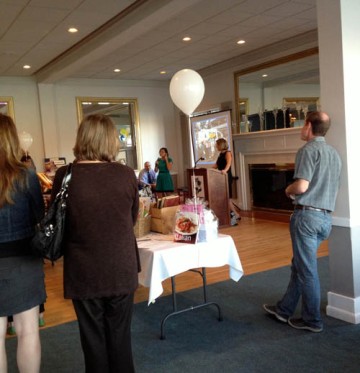 The South Sound Reading Foundation’s principle: To ensure that every child is read with for 20 minutes a day starting at birth, in an effort to increase the number of children entering school prepared to learn, read and succeed. Reading just 20 minutes a day with young children is the key to healthy brain development, family bonding, and success in school.

There was champagne. There were hors d’oeuvres. There was music beautifully played by a youth chamber ensemble. There was a chandelier. All against a backdrop of the Puget Sound.

Never have I had it so nice at a book signing. But best of all, there were people there supporting the cause and buying books.

While listening to foundation members tell about their heartwarming experiences of opening up the world of books to children, I was reminded why illustrating children’s books feels like a slightly higher calling than just being a run-of-the-mill, free-lance commercial illustrator.

I spent much of the past week (while waiting to hear back from my editor on the sketches I sent in a few weeks ago for BOOM BOOM . . . this is the sound of me sitting here, patiently . . . ) writing a post about arts integration for my arts-in-education advocacy blog, Pebbles In The Jar. Arts integration is a method of partnering arts and non-arts curriculum to more fully engage students and deepen learning. Doesn’t writing and illustrating children’s books kind of do the same thing?

That might explain why so many of the people I have met in the children’s book realm are caring, thoughtful, intelligent people. They use their art to get kids to read. They also tend to support the arts, schools, libraries, racial/religious/gender equality, social justice, world peace, and walk-a-thons. They’ve got your back.

And some of the kids are pretty cute, too.

A Writing Lesson at the Museum 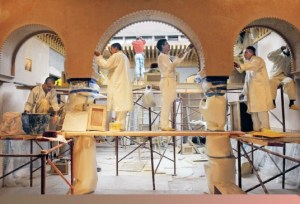 Artisans Preparing the Moroccan Courtyard at the Met

Is it true for many of you reading this  – as it is for me – that when you travel, it’s not places on the pre-planned itinerary which your remember longest, but the small discoveries presented to you by serendipity – rounding a corner or two, you see them there, unexpected and mesmerizing?

I just got home from a ten-day stay in New York City – purely tourist time, not professional development with editors – filled to the brim with inspiration. I did everything on the Master Plan: Saw the Delacorte Music Clock at the entry to the Central Park Zoo, went to the West Side greenmarket, saw two Broadway musicals (Wicked and Newsies), one serious play titled Grace – got Michael Shannon’s autograph at that one), bought dumplings at Prosperity Dumplings in Chinatown after visiting the Eldridge Street Synagogue, visited the 9/11 Memorial (those layered and sunken waterfalls which just keep going down and down, inspiring thoughts of Dante and the nine levels of Hell), walked into Grand Central Station simply because I can’t be in New York without re-visiting and re-viewing the stars on the ceiling there….

So many things on the list – the Jewish Museum (thrilling exhibit of Vuillard paintings), the City Museum of New York (candid street shots of people in NYC and London), went to the Main Library near Bryant Park (special exhibit detailing Lunch Hour NYC – this was my favorite of the pre-planned items) and the Folk Art Museum (exhibit of tinsel painting, along with a mid-day concert by jazz guitarist Bill Wurtzle and singer Sharon Fisher), saw “The Adoration of the Magi” at the Museum of Biblical Art, had some great meals (including Turkish, French, Szechuan and – oh, yes, a hot dog from a street vendor)….

….and – of course, absolutely – visited the Metropolitan Museum of Art several times. Saw the Guggenheim again, love the building, didn’t care for the exhibit. That’s okay – not everything has to inspire us. Rode city buses the whole time, much more fun than the subway or taxis, because you meet talkative New Yorkers on a bus; they love to ask where you’re from and love to express their opinions about EVERYTHING – what they think of Seattle, the cost of living, old age, having the guts to live in NYC, poor street illumination, your shoes, you name it.  What a wide-open town it is! I love New York and New Yorkers.

But to get back to serendipitous discoveries, I have to say that I was lucky to be at the Met on a day when one of the exhibits I had on my Master Plan (the Temple of Dendur – at night)  closed for renovation, and an eager guard (even museum guards in New York City have opinions) suggested I spend my last hour in the museum that day seeing the Moroccan Courtyard up in the new Arts of Arab Lands galleries. “You’ll love it, it’s wonderful,” he told me, and he was right. I did love the courtyard itself, but I also loved the videos of the artisans at work on the courtyard. The Met flew these artisans in from Fez, Morocco, and had them work with tools and material comparable to those which would have been used in the 1300’s. Don’t fail to watch the videos (one of them pans all over the room – you can see everything) here and here.

At Work on a Carving

Oh, my. Oh, oh, oh. Oh, wonderful!! And this wing of the Museum was not even on my list. It had been closed eight years for a total re-imagining. As I stood and looked at the small fountain at the center, the elaborate patterns of the tile work, the magnificently carved arch, I made a couple of notes about processes and techniques to look up (marquetry, carved stucco, zillij/mosaic tile) and notes about what this kind of craftsmanship takes. It’s not unlike writing, in some ways. Here are my notes – read them in terms of writing and you’ll see what I mean.

1. Negative space, positive space: What gets removed just as important as what gets left. 2. Patterns – for the eye, for the mind. Surface pattern. Spirit pattern.  3. “Mosaic” – from the Latin word “musaicum” – meaning of the Muses. 4. Precision – “One tap at a time” 5. Eight years to renovate the Islamic Arts wing of the Museum – entirely re-imagined. Not chronological, but geographical. 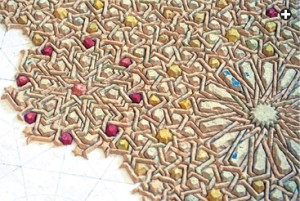 Of course, rationalizing the reason I loved it came after the fact. I just knew it was wonderful. Sometimes, with travel and with writing, you have to trust your plans – you stick with them, see how that works. Nothing wrong with having a plan. Other times, you have to trust luck and stray off the path.  You have to listen to someone else’s advice, stay flexible, revise the Master Plan. Sometimes you’re patient and you respect tradition. Other times, you peek around the corner, see what you see, and love what you love, even if you’re not quite sure why you love it. 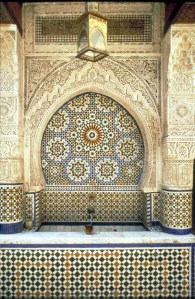 The Nejjarine Fountain in Fez

How My Studio Spent Its Summer Vacation

I’m sitting in the golden light of an almost-autumn day, looking back at summer and the young friends who visited my studio. It turns out you can meet some wonderful people because of books.

In early August, Sundee Frazier and Micheline Lopez drove up from Renton with their daughters in tow for a morning of mural painting and lunch. I met Sundee when I was teaching at Vermont College of Fine Arts, years before she had published her Coretta Scott King-winning debut novel, Brendon Buckley’s Universe and Everything in It. She introduced me to her friend Micheline, who is a children’s librarian. Three years ago Sundee and Micheline started visiting me with their daughters, Skye and Umbria Frazier and Ruby Lopez. This time, Ruby’s older sister Lauren, joined us, too. As you can see there are lots of budding artists in the group.

In addition to the mural, Lauren painted a picture of the three younger girls playing in my garden.

Umbria alternated mural painting with jumping on the mini-trampoline.

Later in August, Lisa Citron from my exercise class visited with three of her children, Tariq, Yasmine and Nuha. We made gouache resist paintings, the medium I use for Zelda and Ivy. (Instructions at http://www.lmkbooks.com/fun/gouache.php).

Ready for the art show! L. to r.: Nuha, Tariq and Yasmine and their mom, Lisa.

At one point in the gouache resist process, you cover the whole painting with black ink and then wash it down in a sink with a sprayer. This is the most exciting part. The black ink floats away and the picture is revealed.

As we were spraying off his painting, Tariq looked up at me. “I bet this is lots better than writing by yourself all day.”

What a thoughtful kid. And he’s right. It is a pleasure to have these children and their moms in my studio and to create art together. I hope they’ll visit again soon.

Tariq and his gouache resist painting.

I have a new book out this week – Apple Cake! 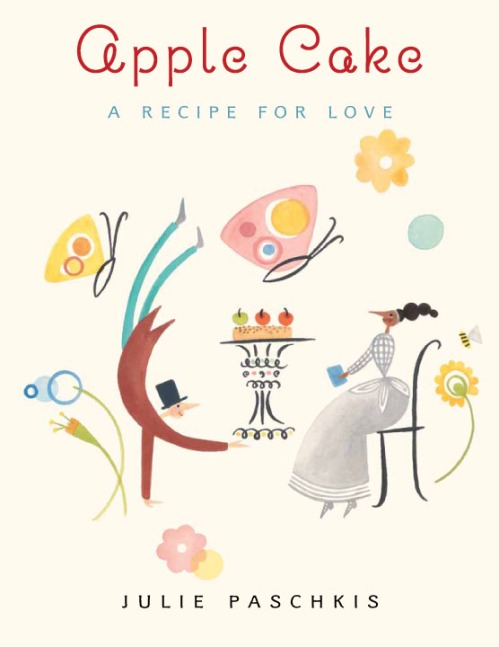 A few winters ago I was fooling around in my studio and painted this man in a treetop.

I wanted to write a story for the character in the tree, but the only words that came to mind were recipes. So I decided to illustrate a recipe.

My great-grandmother Lily Jane Powell made a simple apple pudding cake. Her daughter made it for my mother. My mother made it for our family. My sisters, my brother and I all make it now. It is the only cake recipe that I know by heart. I love the cake, and the cake carries love through time.

I thought it would be funny to have the text stick as closely as possible to the straightforward text of a recipe while the art veered away wildly. This is the first picture I painted for the book.

Alfonso takes an egg and adds it to the bowl. 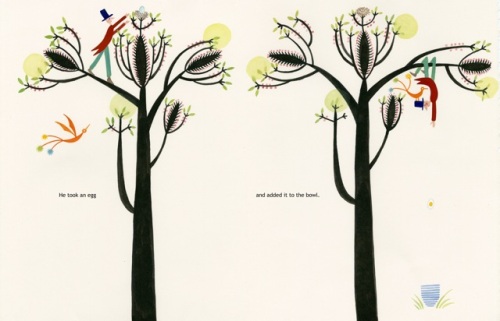 He adds a little salt.

The first ingredient for this book was a painting which I did alone in the studio. The second was a family recipe.  Painting is solitary but books are collaborative; this book would not have been possible without the work and critical input of Reka Simonsen, Linda Pratt, Christine Kettner, Margaret, Laura and Julie.They all made it a better story.  Everybody stirred the batter, even though just one person shows.

The book also led me back to the studio. My husband, Joe Max Emminger, and I are having a show together called Feast. It opened last night. You can read more about it and see pictures at our show blog. It’s feast or famine in this world: this week has been a feast.