Where Lily Isn’t – a read-aloud

So, what have I been doing with all my free time while sheltering-in-place? Sewing masks. Doing puzzles. Reading endless emails about COVID-19…

And, I made a video! With so many kids staying home all day with their families, it seems like the least I can do to help out.

I have to admit, I’m new, and not entirely comfortable with, recording myself. My video is not perfect, as I am not perfect, but it will do. I hope.

After the reading, I encourage kids (adults too, if you are inclined) to send a drawing of a beloved pet. I will post them on this blog. If you know of any children who might enjoy listening and participating, please pass it on!

Our Brains are Story-Making Machines

Take a look at these two images. If you give it a second, odds are your brain will start to construct a story as to why those images are next to each other. Is there a connection? Is there a story here?

It isn’t too hard to start to imagine how these two images could tell a story, but according to David Linden, a  professor of neuroscience at Johns Hopkins, your brain will automatically start trying to figure out a narrative even when I show you something like this.

No matter how improbable, your brain wants to make a connection.

Linden says you can’t help it. It’s what comes naturally. Linden believes the brain is hard-wired to tell stories.  It’s a subconscious function that automatically kicks in. A survival mechanism. After all if you see this: 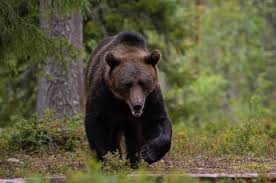 Well, it’s nice to have a brain that is quick to analyze cause and effect.

And isn’t that the essence of story. Connecting one action and to another to another, all the while examining why and how and what to help us figure out how to live?

In my last post, I looked at the book “How Pictures Work” by Molly Bang, where she does a great analysis of how our minds can make stories out of abstract shapes if they are in the right relationship to each other.

Simply placing images side-by-side will kick speculation into gear. But what happens when the relationship gets more complex–as with the Heider-Simmel animation?

Developed in 1944, Fritz Heider and Marianne Simmel, experimental psychologists at Smith College, created it to investigate how our brain can make complex inferences from relatively little data.

The two investigators simply told their subjects to watch the (very short) movie and “write down what happened.” Almost every one of the undergraduates saw the shapes as animate characters in a relationship.

I won’t tell you what most of them said, but there’s a good summary of the experiment and some of the findings here. But before you go, check out the animation yourself and see what your story-making mind tells you.

If you want to share, I’d love to hear the story that you saw! 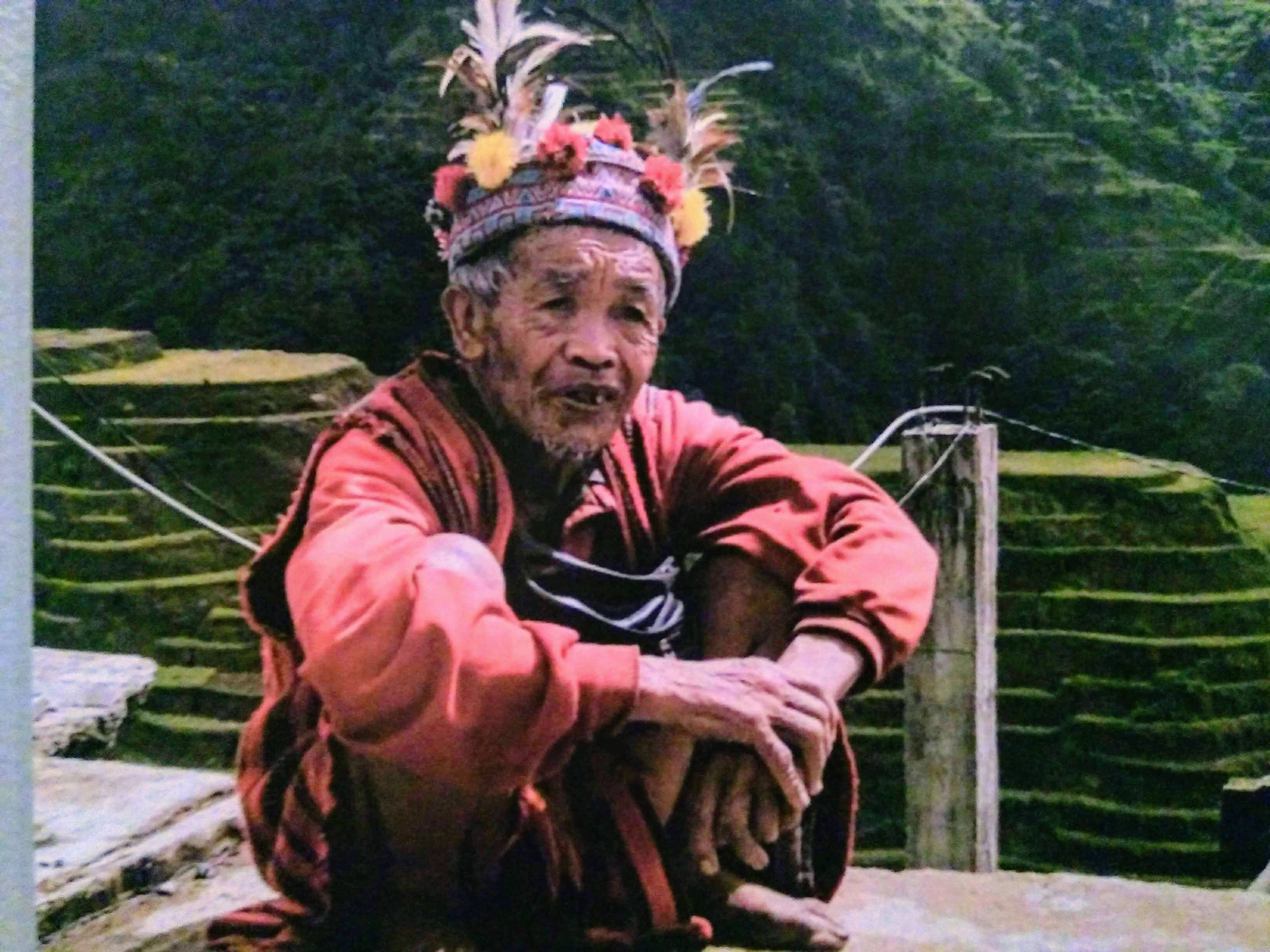 Before any musings about creativity, let me just say this: Be safe, stay well. We have an extraordinary health emergency unfolding locally, nationally, and globally; it’s a good time to defer to the ferocity of pathogens and to honor the advice of experts. I’ve been working on some poems (for adults) that are a bit glib about scientists (what they can’t know about The Soul) but in the last few weeks I’d say it’s the scientists who will tell us the truth about The Body.  Let’s try to support in any way we can the local health professionals who will be asked to respond to the crisis in ways we can hardly imagine, and to help out those who have dwindling resources to weather the storm. Let’s put pressure on our lawmakers to be thinking of “the least of our brethren.”

I keep thinking of Steven Johnson’s wonderful book, The Ghost Map, which tells the story of a terrifying epidemic of cholera which broke out in London in 1854. Officials obfuscated and ignored  it, not unlike what’s happening 150+ years later with Covid-19. If you haven’t read that book, see if you can get hold of it and read it now – it’s reassuring to know that scientists can uncover answers that are not politicized and can focus on finding solutions.

I guess I’ve been thinking a lot about scientists and artists in general, their covalent bonds. Both are attracted to mystery, I think. Both are attentive to detail. Many of the finest people in those two fields are shot through with astonishment at the real, touchable world we live in. Unlike Walt Whitman, who (uncharacteristically) asserted that poets had a corner on the astonishment market (at least in this poem) I think both types “look up in perfect wonder at the stars.”

Both scientists and writers are curious and creative. What is observable and what is not intrigues them both: the bird in the tree, the bird in the head, the bird in flight, the bird as a metaphor, the song of the bird – the long, looping red thread you see below. How we look at the world if we’re engaged and reflective.

Speaking of engagement, wonder, creativity, curiosity, and the touchable world, I saw a show recently at the Whatcom Museum in Bellingham which draws on all four. It’s titled The Global Language of Headwear: Cultural Identity, Rites of Passage, and Spirituality. You might think it odd to say that headgear speaks a language, but it’s true, isn’t it? Can we always translate what’s said? Well, we can use our imaginations. And like any exhibit that pulls samples from around the world, it helps museum-goers understand the commonality of diverse cultures: a desire to celebrate, a need to mourn, to play, to be colorful, to stay warm, and (maybe unfortunate but entirely human) to distinguish status.

Here are some of my favorites, with little commentary: 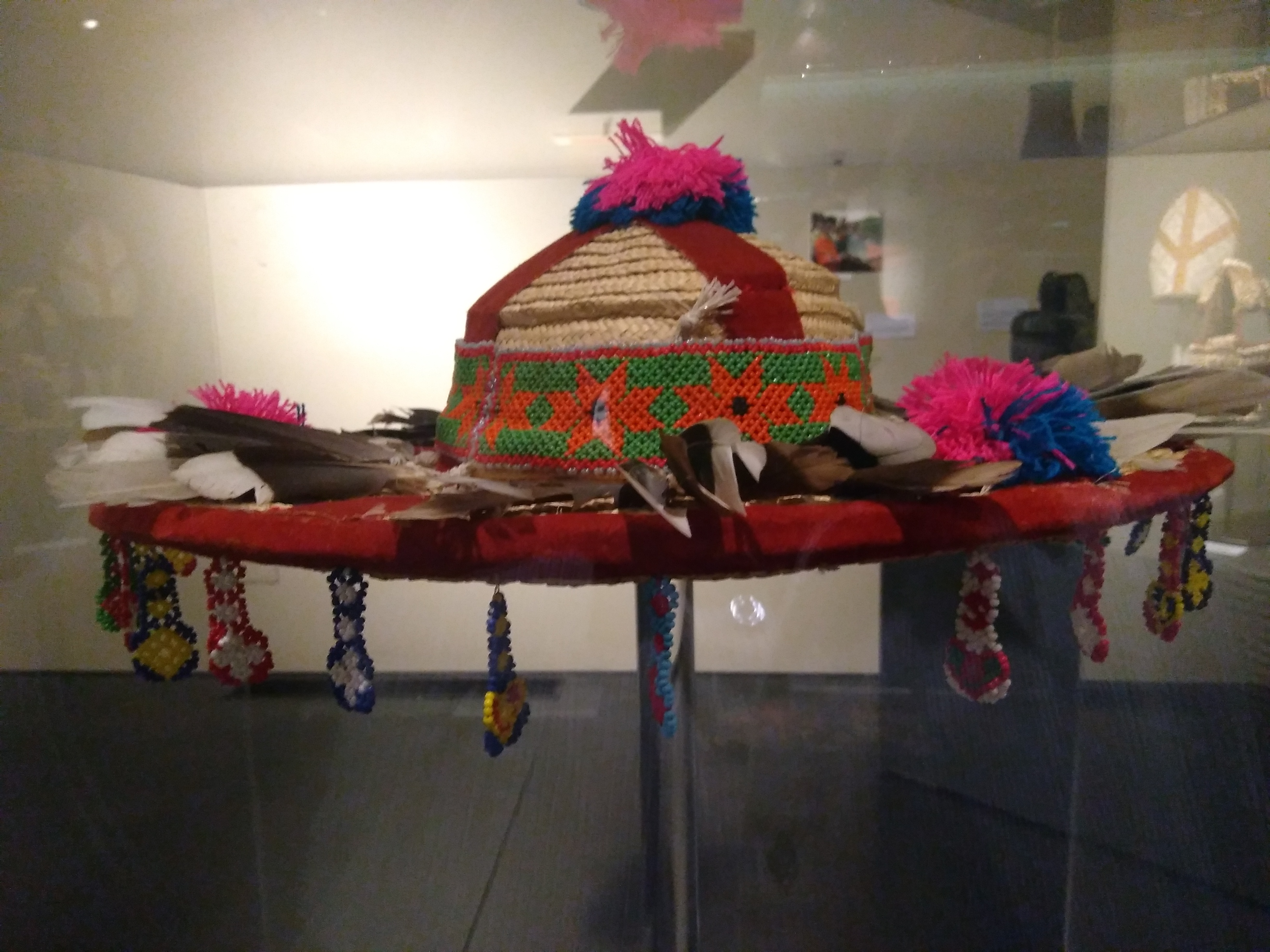 Here are some closer up, to catch the detail:

At the exhibit, many of the hats were paired with photos of the delightful people wearing them: 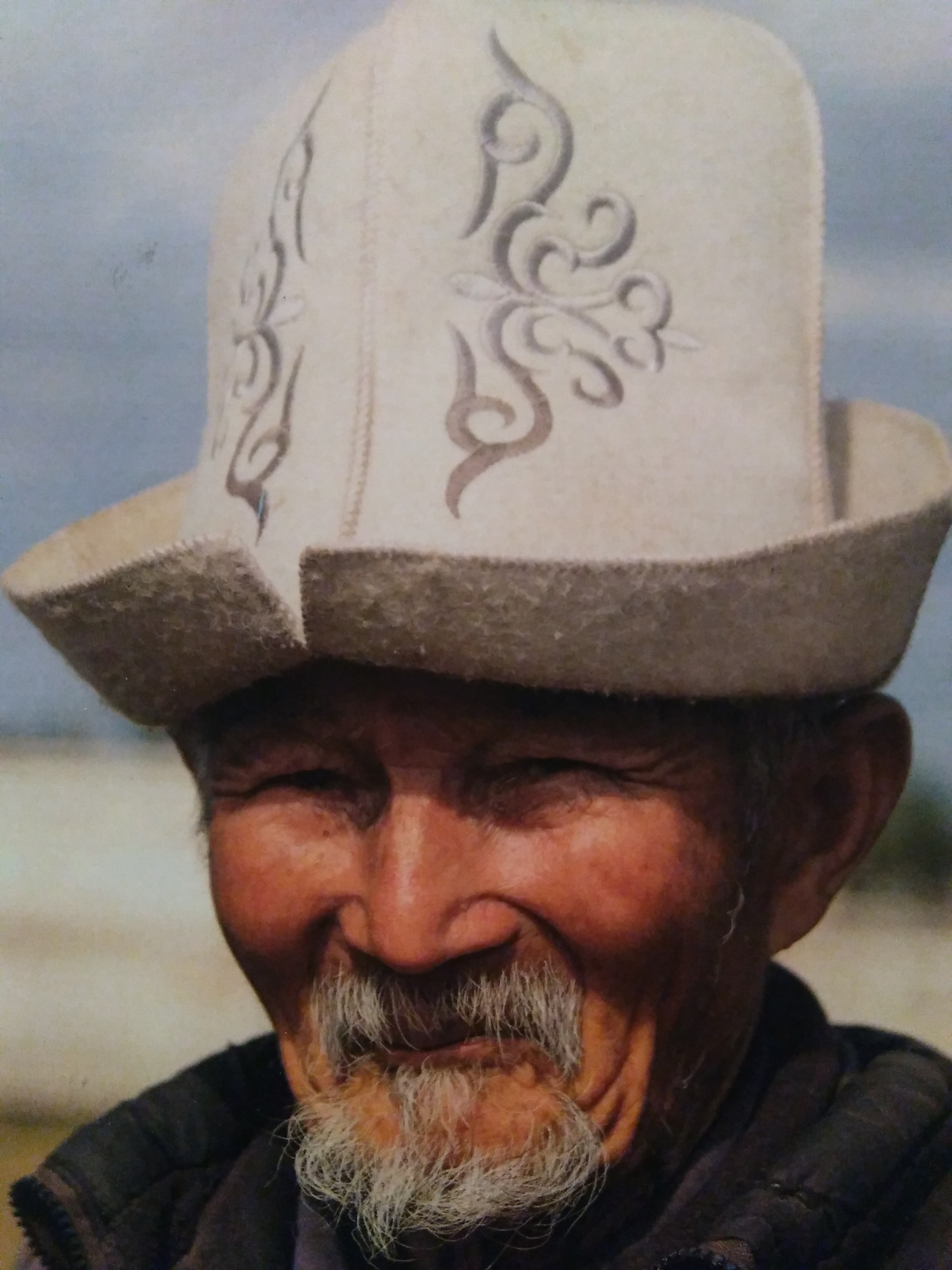 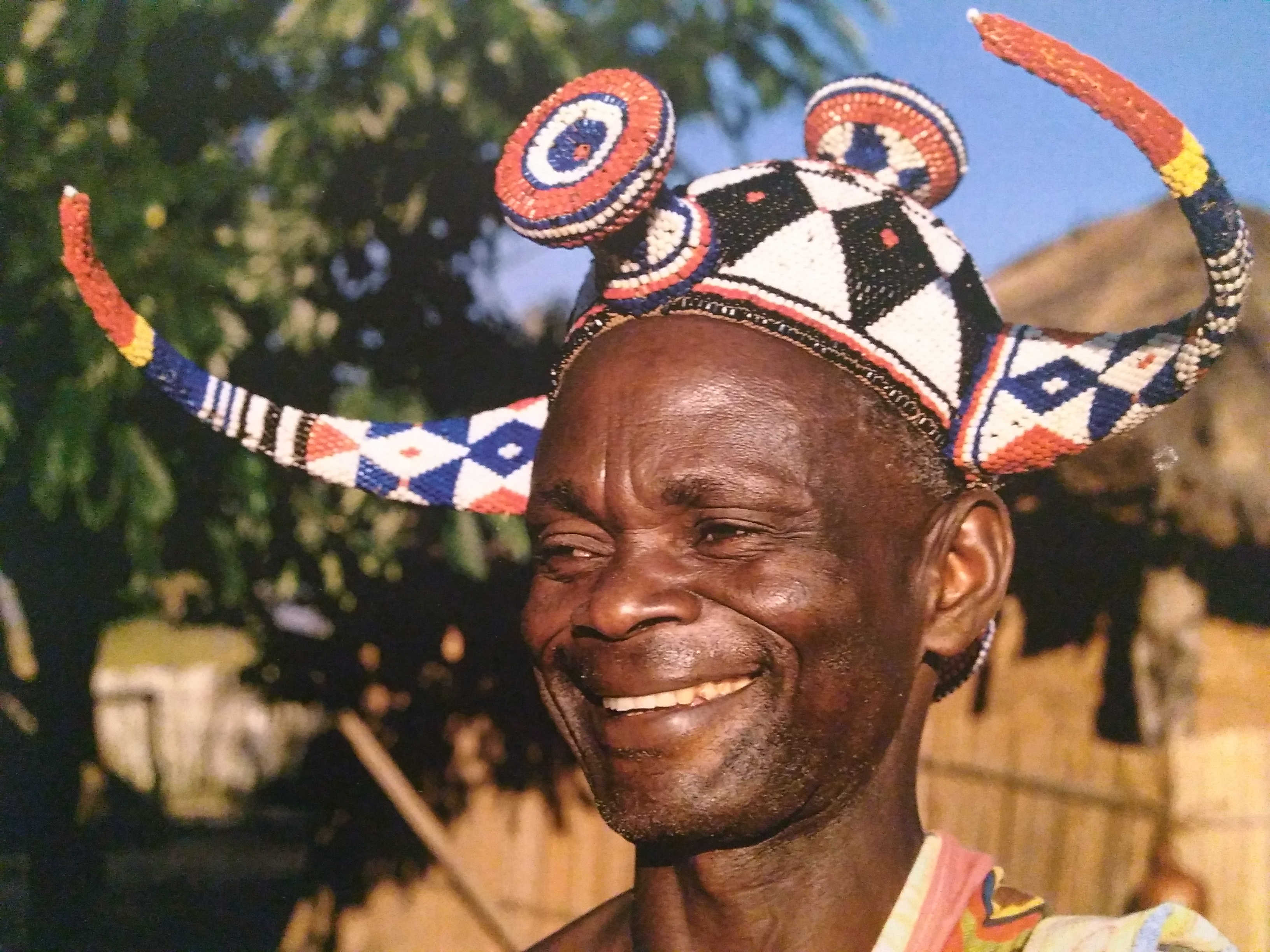 Just look at the joy and pride on those faces. Look at the smiles! As I’m writing this post, I’m also listening to the most recent press conference about the pandemic. Sorry to be a cynic, but what I hear is people congratulating themselves about how they’re addressing — better late than never? — this pandemic. Listening to it is irritating me. Such a lot of self-praise. Such hubris. Argggggghhhhh!  I’ll take artists and scientists over politicians any day. (Well, this recent exception:Katie Porter, Rep.-California, she’s a hero.)

Once again: Stay safe, be well. If you’re over 60 and staying home in general (as I am) let’s exercise our imaginations, examine our obsessions, trust our creativity, indulge our writing eccentricities, get out into the brisk spring air from time to time, look down for a few tulips, look up for a few hats, look everywhere for smiles to brighten things up. Be astonished.

WE’RE SITTING TIGHT here in Seattle, at the U.S. epicenter of the coronavirus, while news of Boeing’s 737 Max crisis, the Democratic primaries, and the stock market’s volubility swirl around us.

How to stay calm in these stressful times? Curl up with a good book. 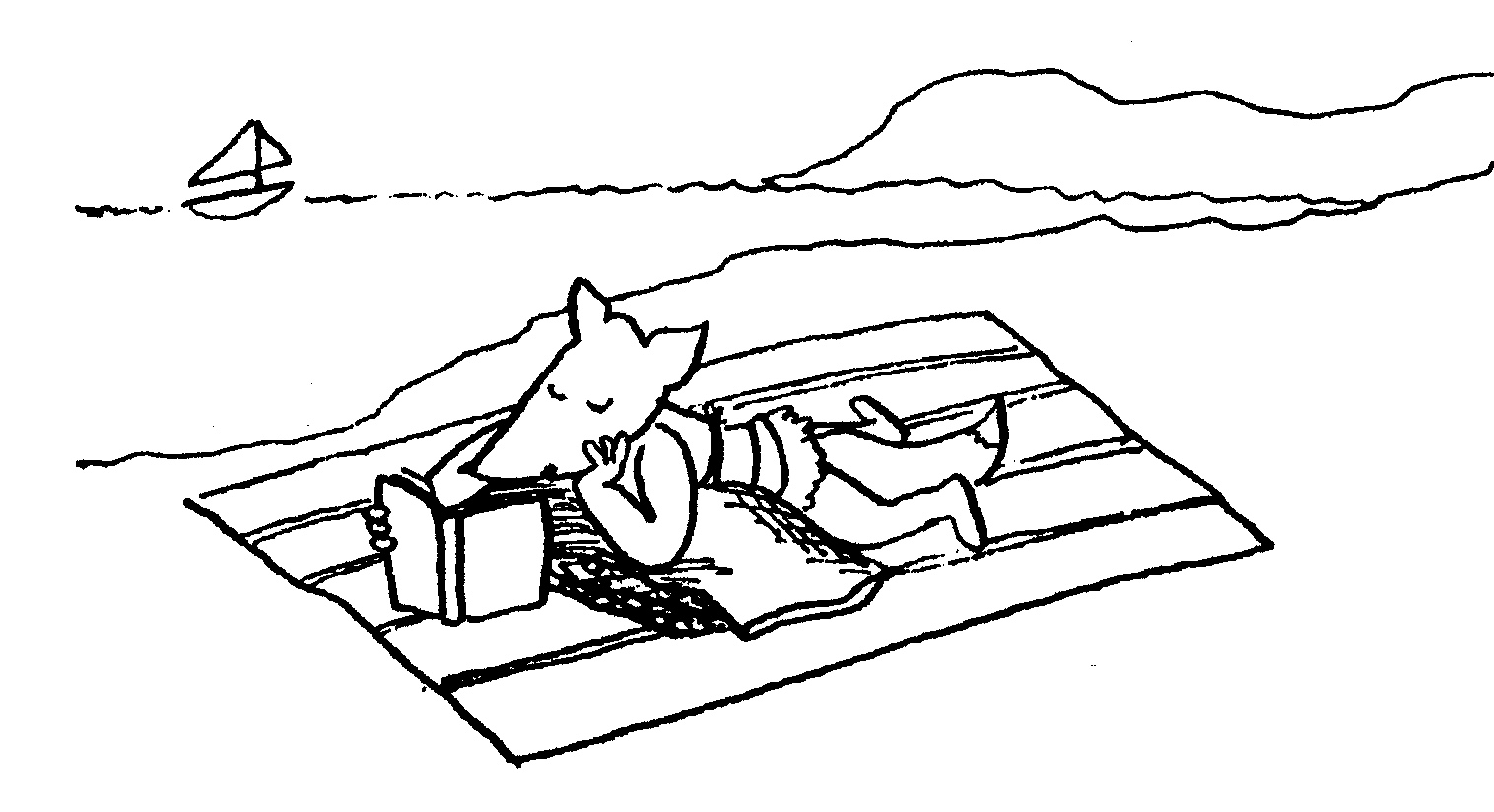 From its first sentences, a good book opens a door into the story and you are welcomed in. Everything in the ‘real’ world – from big concerns, like global warming and homelessness, to the quotidian, like the dog’s teeth that need brushing, and piles of laundry, and unpulled weeds – everything fades away. You may find yourself with that other Laura, settling down to sleep in the loft of a Little House in the Big Woods, or howling with a wolf pup on a faraway mountainside, or summoning an owl messenger to Hogwarts with a certain boy wizard.

Stories give us a chance to live forward and backward in time; to inhabit other places, be they real or imagined. We can put on the skin of a dragon or a fox or another person. In stories, we can experience things that are way too scary or infuriating or heartbreaking to experience in real life. If, subsequently, our own lives serve up fear, or anger or heartbreak, sometimes it is a story that helps us through, offering information and comfort.

The wonderful irony is that while a story can offer refuge from the ‘real’ world, it also has the amazing power to connect. We humans are story people. I wrote about the chemical reason for this in my last post.

When we share our stories – in both reading and writing – that connection leads naturally to empathy, an empathy that sends us back to the ‘real’ world refreshed for the challenges ahead. I like how Barrack Obama put it: “The thing that brings people together to have the courage to take action on behalf of their lives is not just that they care about the same issue, it’s that they have shared stories.” I hope other politicians know about this.

WE MADE A RUN to Costco Sunday and I can assure you that should we be quarantined because of the coronavirus, we have sufficient maple syrup, guacamole and toilet paper for the duration. More importantly, should the weight of the current news cycle become too heavy, the Seattle Public Library offers an escape to ebooks and audiobooks, all easily downloaded from the comfort of our isolation.

We’re up to the challenge, here, holding down the northwest corner of the map. But a little bibliotherapy may be necessary. 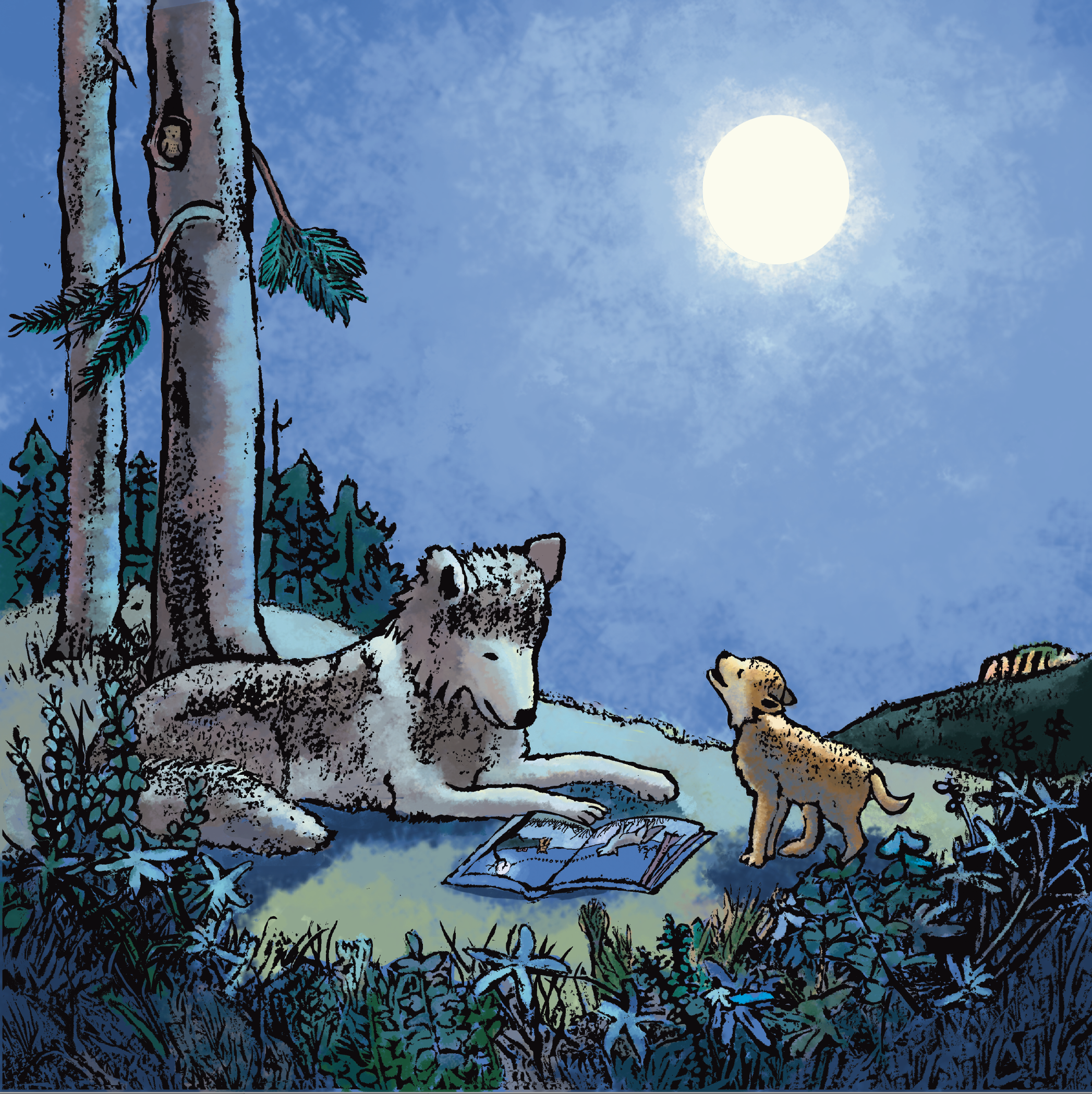 The characters from Little Wolf’s First Howling, as featured in the Mazza calendar last year. Thanks to my sister Kate Harvey McGee for the lovely colors.