Coming up with ideas is the nub, the hub and the rub of what I do. But where do ideas come from? I don’t have a simple answer.

But I do have ideas about ideas. Here are a few of them:

Ideas come from looking outward. Everything I see, hear and feel goes in.

All that input swims around inside, mixing with memories. That collision of the outward and inward can make ideas.

Ideas like company: the more ideas I have the more I get. They bounce off of each other and multiply.

Sometimes ideas don’t like company. Voices from the radio, tv, friends and family can overwhelm them.

Starting is hard. When an idea is new it is tender and needs to be sheltered. It is easy to kill a new idea.

Ideas often visit when I am barely awake or barely asleep. Sometimes those ideas disappear in the light of day but sometimes they stay.

Ideas never turn out as planned. I picture something new and beautiful, but it always changes in good and bad ways when it becomes real. What happens is often not what I expected.

My hands have different ideas than my head.

Ideas take their own sweet time. They develop while I am doing other things and not thinking directly about them.

Ideas like motion. They unspool when I’m bicycling, swimming, walking.

Good ideas can come from bad ideas. Or not.

Sometimes I fear that I will never have another good idea, or that every idea I have is stupid. The only way that I have found to deal with that fear is to ignore it – to just plow ahead and make something (a story, a painting, a poem) for the pleasure of the making. Because once I start I don’t know where an idea will take me, and that is what keeps me going.

These are some of my thoughts about ideas – I’d like to hear yours.

p.s. All of the art in this post will be in my show next month at the Bitters Co. Barn in Mt. Vernon. The opening is September 17th from 12-4. Please come if you can!

When I wrote my last post for this blog, I had just moved out of our rented home in London. With most of our belongings headed to Seattle in a shipping container, my husband, daughter and I felt like tourists again.

Until two days ago, when we flew back home. My re-acclimation to American life has begun. But, for my next couple of posts I will be returning to London (in spirit at least) to write more about my visits (I went back a second time before I left) to the Victoria & Albert Museum’s Prints and Drawings Study Rooms.

The V & A has most of the original drawings by E. H. Shepard for A. A. Milne’s Pooh series. My mother used to read to me from Milne’s Now We are Six when I was young (the book made turning six sound very grown up) and I still hear my mother’s voice when I read it now.

I was able to request several boxes of Shepard’s sketches. The drawings are all in pencil on the pages of a 9″ X 14″ sketchbook.

Shepard’s lines are fluid and confident. 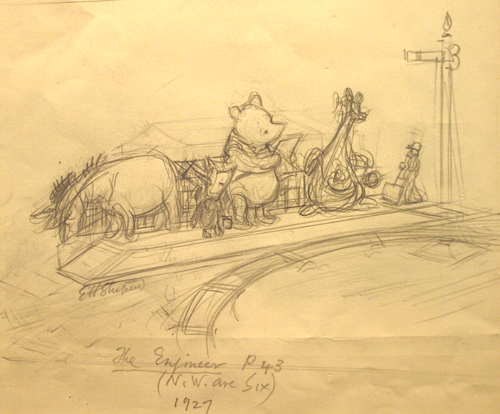 I like to see where he tried different options and erased or crossed out some. 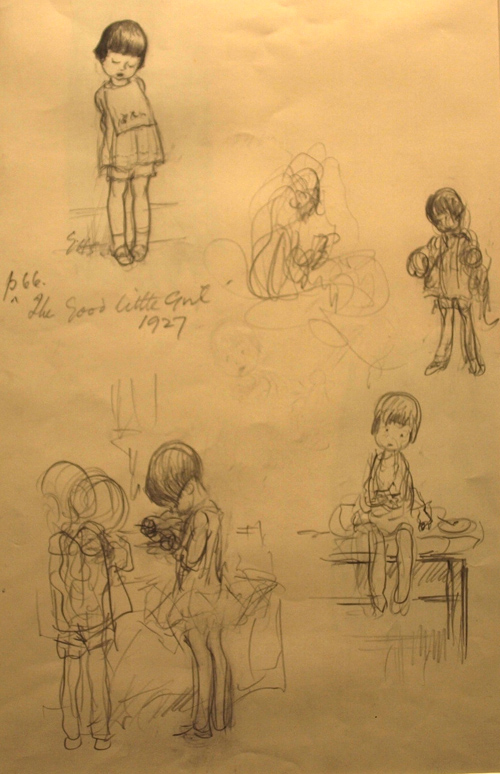 It’s also interesting to compare these drawings to the finished art from the published books. 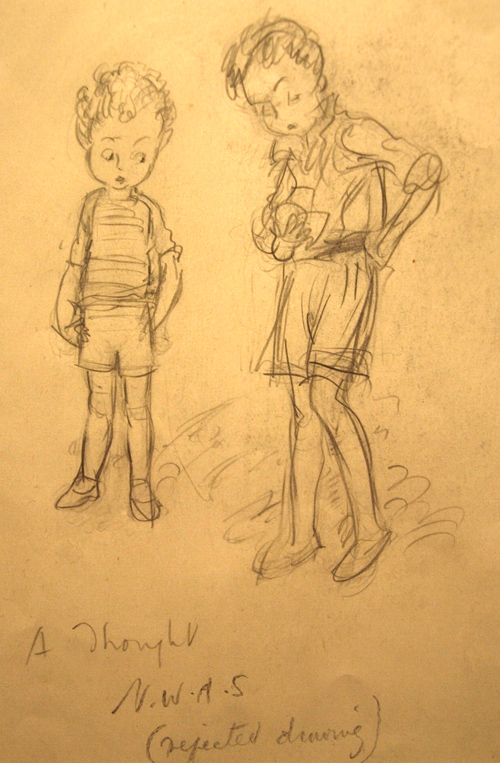 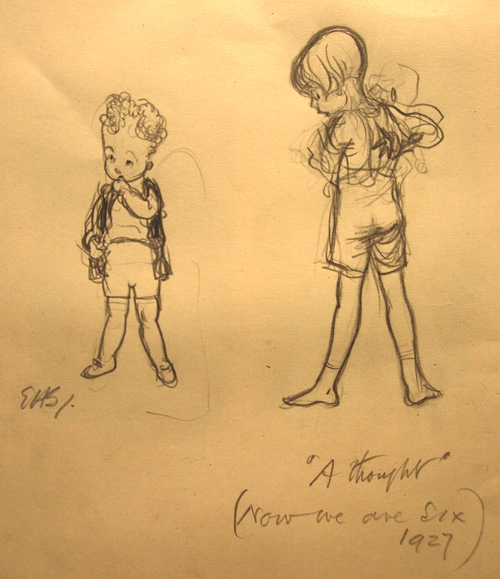 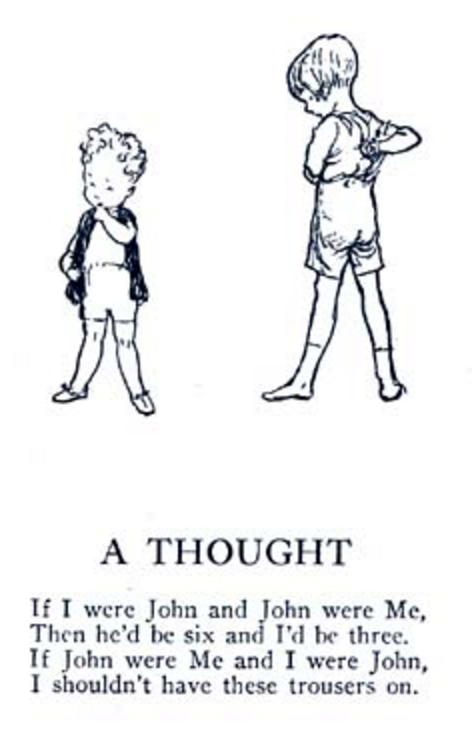 Sometimes Shephard draws many lines till he finds the right ones (I can relate to that). 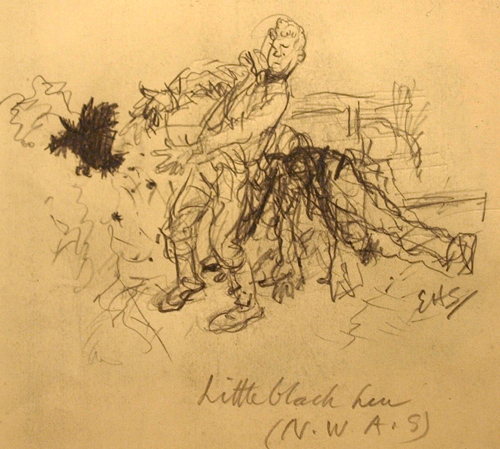 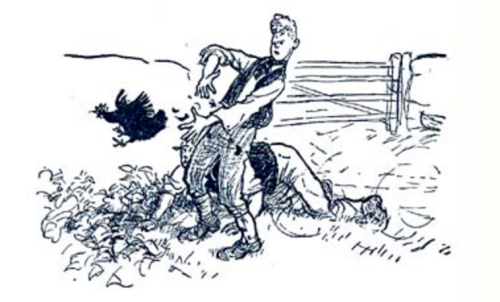 On the sketches that were accepted for the final illustrations, you can see that Shepard rubbed a graphite pencil across the back and then traced over the image to transfer it to his drawing board.

And of course, bears.

When I was One,

I had just begun.

When I was Two,

I was nearly new.

When I was Three,

I was hardly Me.

When I was Four

I was not much more.

When I was Five,

I was just alive.

But now I am Six, I’m as clever as clever.

So I think I’ll be six new for ever and ever.

Into the Woods With Jung

Why does Harry Potter battle spiders? And Wilbur, the pig, befriend one? Why does Odysseus sail the sea and that girl go down in the basement in every horror film?

There are lots of reasons for these creative choices, but I think chief among them is the fact that these are all “charged” symbols, characters and events. They carry more than their literal weight when it comes to creating emotional and psychological effects in the reader or viewer. And as a creator it’s worth your while to learn more about deep symbolism.

Carl Jung is a great place to start. The early-20th century psychologist was one of the first people to explore the human unconscious to try to codify the powerful symbols and images that arise from there.

Recently I checked out Jung’s The Red Book from the public library. It’s Jung’s fascinating exploration of his own unconscious through symbolic writing and his own illustrations. (All the illustrations in this post are from “The Red Book.”)

The writing can be hard to work through. Some is reasonably accessible:

Christmas has come. The God is in the egg.

I have prepared a rug for my Lord, an expensive red rug from the land

I am the mother, the simple maiden who gave birth and did not

I am the careful father, who protected the maiden.

Night on the dark fields.

Some of the writing not so much:

However, I am not ready, since I have still not accepted that which chokes my heart. That fearful thing is the enclosing of the God in the egg. I am happy that the great endeavor has been successful, but my fear made me forget the hazards involved. I love and admire the powerful. No one is greater than he with the bull’s horns, and yet I lamed, carried, and made him smaller with ease.

But his paintings are powerful and evocative. It’s hard to say exactly how. I don’t know why I keep coming back to study this dragon slayer, but I do. 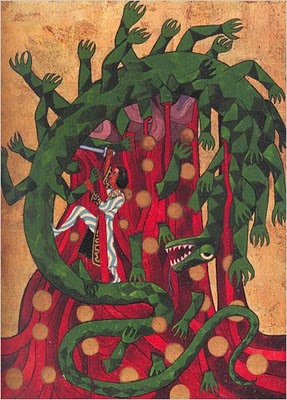 Of course, most of his paintings are deliberately symbolic and as, Jung notes, a symbol has “a wider ‘unconscious’ aspect that is never precisely defined or fully explained. Nor can one hope to define or explain it. As the mind explores the symbol, it is led to ideas that lie beyond the grasp of reason.”

Jung goes on to say: “Because there are innumerable things beyond the range of human understanding, we constantly use symbolic terms to represent concepts that we cannot define or fully comprehend.”

In The Red Book, Jung was exploring his own mind, but he believed that many of our symbols (or archetypes, as he called them) were universal coming from the “collective unconscious” of humanity.

One of my writing friends is very aware of Jungian archetypes and other mythic materials such as Joseph Campbell’s hero’s journey. And she consciously works these ideas into her stories. The result is often images or characters or events that are supercharged. Somehow they are more evocative or disturbing than their obvious elements would suggest.

But even if you aren’t that conscious of universal symbols, there’s a good chance you’ll hit on them if you let your thoughts and emotions go deep. What scares you more than it seems it should? What naturally comes to mind as you take your character on an adventure? Does she end up in a cave? Does he travel by water? Meet a monster? Climb mountains? Explore attics and basements?

Water is often a symbol of the unconscious. And it’s not simply by chance that heroes on a quest for self-knowledge will often cross something watery. We see it in some of our most powerful fiction from The Odyssey to Moby Dick to Ursula LeGuin’s A Wizard of Earthsea. Monsters are constantly rising up from water–the serpent thing in the trash masher in “Star Wars”, the Loch Ness monster, the Swamp Thing.

For some reason there seems to be an almost universal fear of spiders (why do we find the swastika so creepy? Is it just contemporary cultural association or does it go deeper.) Yet, EB White makes Wilbur’s friend a spider. White says  that’s because he became interested in spiders after watching them on his farm. But it’s hard to believe Charlotte’s Web would have the power it does if Wilbur had befriended a less symbolically charged creature. And I suspect EB White was deliberately playing against type and stirring unconscious emotions with this choice of hero.

Jung believed houses and other buildings are symbolic of our own psyches. Tower rooms may represent our conscious intellect. Dark basement our subconscious and every maker of horror films knows that nothing is more frightening than the idea of going down into the dark unknown that lingers there.

I’m betting most of these creators–from JK Rowling to John Carpenter to Ursula LeGuin–were well aware of the symbolic charge of their choices. And you can be to. If you’re interested in exploring archetypes and symbols more, some good books include Man and his Symbols, a book featuring an essay by Jung and then commentary by others on his ideas. There’s Joseph Campbell’s A Hero with a Thousand Faces, Christopher Vogler’s The Writer’s Journey and Bruno Bettelheim’s The Uses of Enchantment and authors like Clarissa Pinkola Estés who writes extensively about women and their particular symbolic needs and expressions.

from My Family Tree by Dusan Petricic

Just want to make sure you all know about (and have a chance to subscribe to) the site called ART OF THE PICTURE BOOK, which comes out online with interviews of wonderful picture book illustrators from all over the world. Listed on their main page right now, among others, are interviews with Oyvind Torseter (of Norway),  Renata Liwska (born in Poland, now lives in Calgary, Canada),  Kris Di Giacomo (born in Brazil to American parents, now lives in Paris), Yasmeen Ismail (born in Ireland, now lives in Bristol, England)  and Dusan Petricic (of  both Toronto and Belgrade, Serbia.  I’ll let the drawings and photos speak for themselves – just know that the site often features glimpses of the artists at work and spreads from their sketchbooks. I encourage you to subscribe – it’s free and easy! You’ll find a subscription form here. 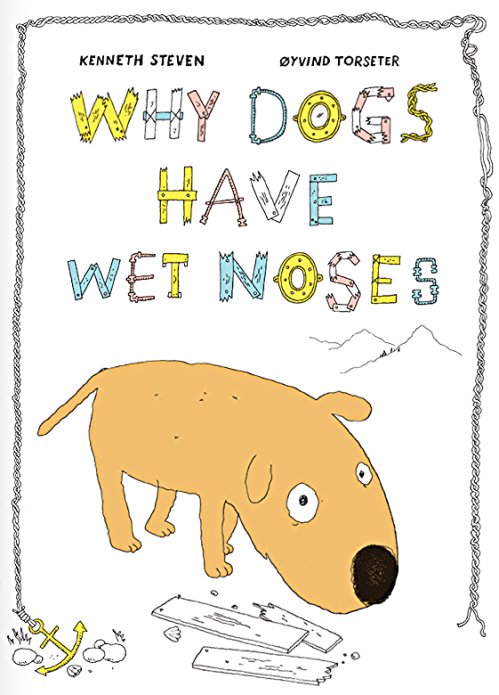 Cover Art for Why Dogs Have Wet Noses by Kenneth Steven

The Quiet Book by Renata Liwska 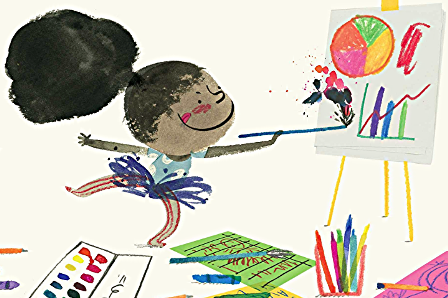 “I love poetry. I think it is the most important field in literature for me. With poetry you have to be very precise, very focused and explain simple things. There’s always something a little bit conceptual in each poem. So I love to do that. It’s a lot to do with my opinion about cartoons in general, not only political cartoons. The cartoon is a way of thinking. So poetry and cartoons are similar to me. And that similarity is very simplistic, with the concept of how to find the right, the most precise way to explain yourself. With the least possible words.” [from the interview of Dusan Petricic]