Estoy escribiendo hoy desde Oaxaca….no, no, no, I mean I’m writing this from Oaxaca today. I can hear the grinding of the gears as my brain switches between Spanish and English. I can hear a little more grinding in the switch from Go-go-go-go-go to relax-relax-relax-relax. and even more grinding between the London bobby style of giving directions (“Two blocks down, Miss, on your right, blue door, black doorknocker, can’t be missed….”) and the Policia Municipal (“Si, si, Senora, the museum used to be here, it moved, maybe a block down, maybe four or five, but not too far, over that way, just down that direction, maybe on the other side of the park….” and it’s always nice to walk through the park even if you don’t find the museum.

Eventually – a few days into things – the gear-grinding stops and all is smooth. You are not quite you, but you like the you you have become. The logical left brain gets quieter, the right brain sings.  Colors intensify.

…and the sense of smell intensifies. You can smell ripening guayavas somewhere. There, on the other side of the wall, a guayava tree.

There, on the other side of the wall….

A green parrot hangs in a cage from a tree inside a cloister built in the 16th century. He looks at you sideways, his bright red eyes rimmed all the way around with yellow. “Hasta luego!” he says when you walk away.

It’s an important time in Oaxaca – the three-day spread that surrounds the Day of the Dead, and I’m headed over to the cemetery as soon as the sun goes down.  There are tubas and trumpets and drums; there are people who have become skeletons; there is dancing in the streets.  There are marigold-covered altars to the dead inside many courtyards.  There are images everywhere of La Catrina, the young lady skeleton with wide hat and parasol. Everywhere, Los Muertos  – the Dead.  And I am feeling quite alive.

Internal Editor: Try writing about the creative process. Maybe about how words and sentences are bent to our use at the same time they shape the story? You could start with a music analogy – something about how the instrument shapes the musician – or vice versa? Get started. 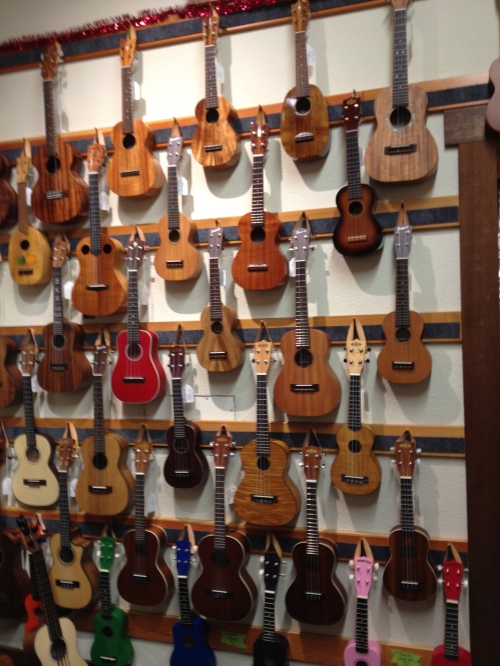 The walls in Dusty Strings’ music store remind me I am a ukulele. There are rows upon rows of beautiful instruments on those walls, each with a carved sound box and new strings. Each instrument has its own voice according to how it was made and how it is played. Each awaits the talents of a musician to make music.

Our Books Around The Table group met around Margaret’s table this week. The discussion was as delicious as the lunch. She made this black bean soup: http://smittenkitchen.com/blog/2010/01/black-bean-soup-toasted-cumin-seed-crema/

When you have a recipe, you know what you’re making. With this list of ingredients, the result will be always be black bean soup, not cherries jubilee or chocolate mousse.

Not so with writing.

Often when I begin to mix story ingredients on the page, I am not so sure where it will lead. A poem, a short story, an early reader?

As I sit to write my blog post this month, my eyes are drawn outside to the hazelnut tree where a fat grey squirrel makes his way along the branches. He balances out on the spindley twigs, where the nuts are ripe. Sometimes he stops and chows down. Sometimes he scampers away with a nut in his mouth; I guess to bury it. And I think how I gather story ideas. Sometimes to immediately crunch into a story, more often to squirrel away for a hungrier season.

I.E.: Stop looking out the window and get focused. You are supposed to post this today. You need an idea that will go someplace. This is crap. Crap. Crap. Oh. That reminds me of what Kate says. Maybe start with that?

My sister Kate McGee is part of an open studio tour in the Willamette Valley near Corvallis at the end of this month, www.PhilomathOpenStudios.com.  She’s been getting ready, sifting through her work for the most successful paintings. She always says you have to be willing to try lots of paintings that don’t work to get to the ones that do. Our mother would object to my use of this word, ‘crap,’ (sorry, Mom), but what Kate’s saying is: you have to make lots of crap to get to the good stuff.

Unfortunately, that’s the way it is with writing, too. Seems like I have to write lots of unsuccessful pieces to get to a story that has the juice.

I.E.: Who doesn’t know that? You need a new idea. And hurry up about it. Izzi’s waiting for her walk.

I.E. Maybe you could check email. Oh, here’s something that is definitely not crap. Begin again.

My Uncle Bo, who celebrated his 90th birthday this week, is an avid disseminator of internet stuff. He sent along this flashmob performance of the chorale from Beethoven’s Ninth and last symphony, written after Beethoven had become completely deaf. http://www.youtube.com/watch_popup?v=GBaHPND2QJg&feature=youtu.be

Like a good novel, this performance of the familiar anthem builds in a satisfying way: the orchestra assembles player by player, then the choir fills in behind. It is filmed so we can see the crowd’s pleasure as well as the musicians’. There’s that quality of shared warmth and welcome that gives it soul.

I remember singing this chorale with the Occidental College Glee Club, first in German, then in English. I think in this YouTube performance it is sung in Spanish. It is traditionally sung on New Year’s Day in Japan. Wikipedia says it’s considered by some to be the best song ever written. Over eleven million people have viewed this performance on YouTube – that’s technology at it’s best, bringing people together through music.

Was it at the last Olympics opening ceremonies that this was sung around the world simultaneously? Another coup for techonology. In any case, this performance is very moving. Which is what we want from the creative process, right?

I.E.: “Let us sing a song of joy for love and understanding…”

Yes. That has some juice. 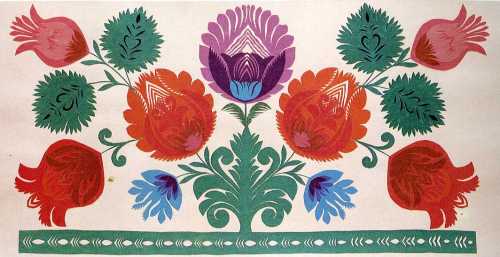 In high school I worked  at a Polish import store that sold wycinanka, traditional paper cuts. I was told that these delicate constructions were cut with sheep shearing scissors. I have loved cut paper ever since then. Here are some examples of papercuts and some examples of scissors.

This Polish rooster is visiting with a Chinese bird and butterfly and with a rooster from Indonesia. Below are some Papel Picados from Mexico. 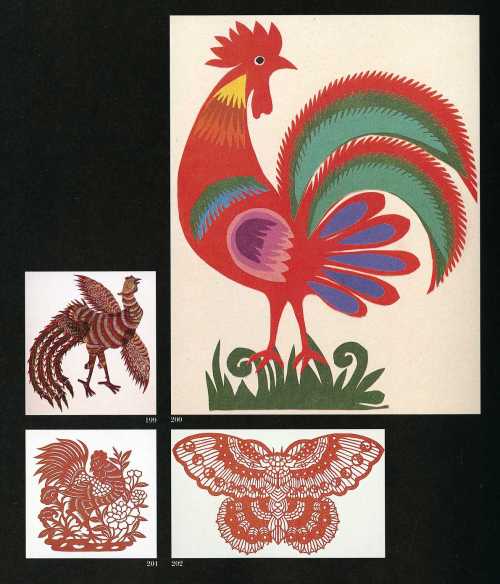 In the 1920’s and 1930’s Lotte Reiniger made animated movies out of cut paper silhouettes. Here is a link to one about Papageno. 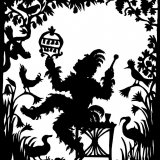 She cut with sharp knives, but I like to imagine her using these scissors: 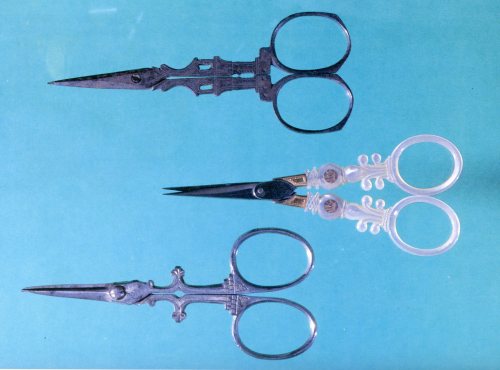 Nikki McClure and Rob Ryan have done amazing work in recent years, such as this piece by Ryan.

Here is a medal for him.

Peter Callesen and Mia Pearlman have stretched the form. This dimensional whorl was made by Pearlman.

I have been snipping at paper for about 1o years and had a show of papercuts in 2006, which included Adam and Eve (5 feet tall),

I love the symmetry of traditional paper cuts, but illustrations for stories sometimes need unsymmetrical parts. Here is my illustration  for the Snow Queen by Hans Christian Andersen. 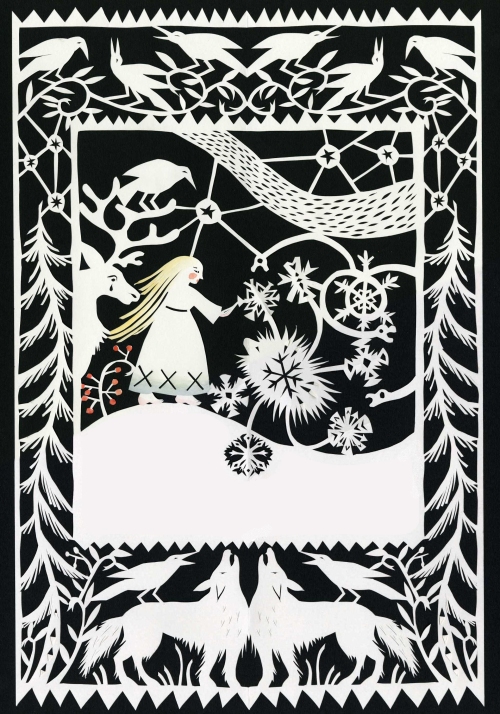 and here is one for a juicy poem by Julie Larios. 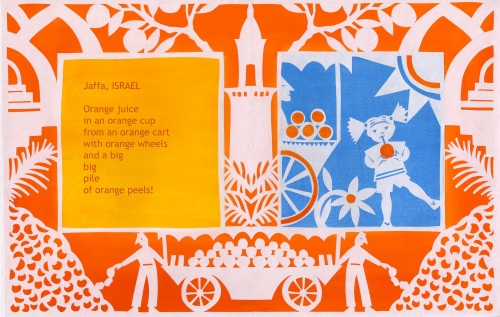 Here is a celebration of bicycling and hats. 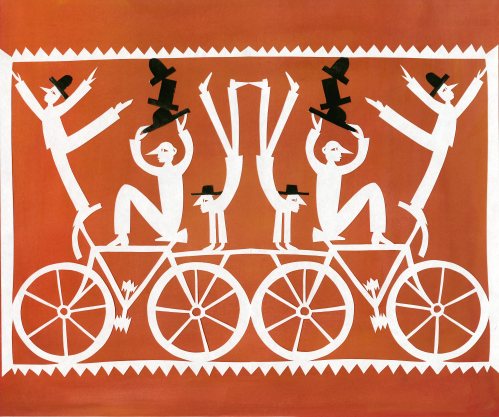 If you are interested in working with paper please take a look at the book Creating With Paper by Pauline Johnson and Hazel Koenig. It was first published in 1958 and it is still fresh.

To wrap things up here is a poem by David Mason, followed by two more Polish papercuts.

When I was looking though my books from childhood, this image from the endpapers for The Golden Book of Children’s Literature, pulled me in again, just like it did when I was young. People who live to read (can you find them all?) is the world this book invites us into. And that got me thinking about the special place endpapers hold in books.

Endpapers are the opening and closing of a book. They can be as simple as a well-chosen tint of colored paper stock to set the mood, and palette of a story, or they can provide another surface for the illustrator to use in their storytelling. I like including illustrated endpapers in my books. In fact, when I was hoping to win my first picture book illustration contract, for BUZZ by Janet Wong, I included a description of the endpapers in my initial notes to the editor. She told me later that that helped convince her that I was the right artist for the job.

Some endpapers are purely decorative, yet still reflect the book’s theme, as in Maud and Miska Petersham‘s charming endpapers for The Poppy Seed Cakes, by Margery Clark. 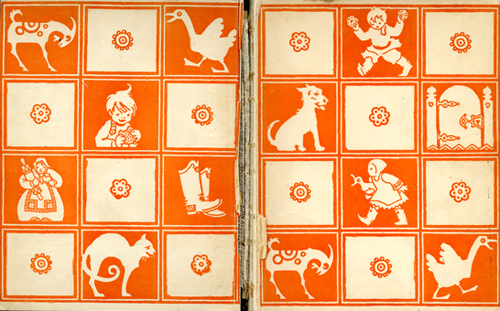 And Eric Carle‘s endpapers for Bill Martin, Jr.’s Brown Bear, Brown Bear, What Do You See? (“I see a red bird looking at me.”)

Others serve to book-end a story, as in this array of “photos” from Marla Frazee‘s A Couple of Boys Have The Best Week Ever.

I took this approach for my own Best Best Friends, which takes place during business hours at a preschool. The cubbies are full when everyone arrives,

and empty (almost) after they leave.

Endpapers can also be a handy place to put interesting but extemporaneous information that could otherwise bog down the story, as in Virginia Lee Burton‘s Mike Mulligan And His Steam Shovel,

plus extra funny stuff, like in Laurie Keller‘s The Scrambled States of America Talent Show.

Chris Raschka and Vladimir Radunsky instruct you on proper dining etiquette in their book, Table Manners, and use the endpapers to advertize the advantages of observance, before and after. 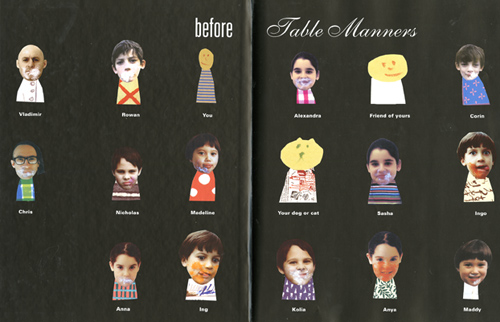 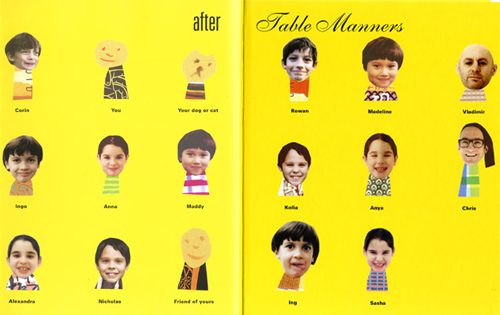 Some illustrators use the endpapers to extend the story to it’s fullest possible extent. In David Small‘s illustrations for Sarah Stewart‘s The Friend, they function as prelude, setting up the scene of the lonely little girl in the big house,

Keith Baker‘s endpapers for Hide and Snake begin and end the game where we have to find the snake hiding amidst the other patterns. 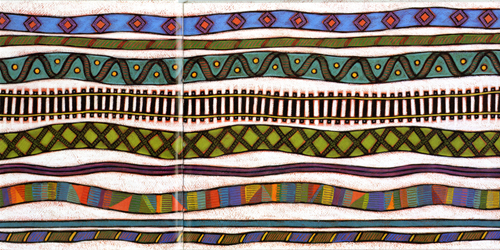 The colored bands continue to the title page, 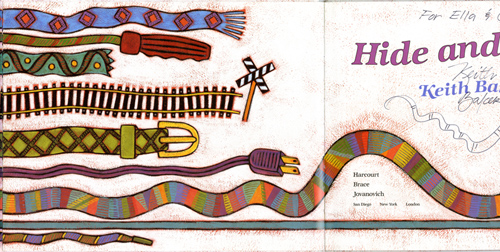 and carry through to the last page where we see that the turquoise line that reads as the ground throughout the book is actually toothpaste. Ha, fooled again!

And as if the rest of the book isn’t beautiful enough, Peter Sís‘s exquisite endpapers for The Tree of Life: Charles Darwin could function as separate, additional picture books in and of themselves. I mean really. 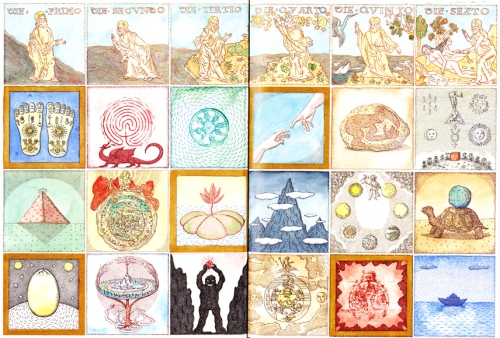 Unfortunately, endpapers are often left out of later editions of books if they go to paperback or board book formats. While these editions are more affordable than hard cover, it’s a shame that the endpapers are seen as expendable. It’s like getting a hamburger without the bun.

Nevertheless, when you set out to illustrate a picture book, keep the endpapers in mind as part of the whole package. Who knows, it might even get you a book contract some day.