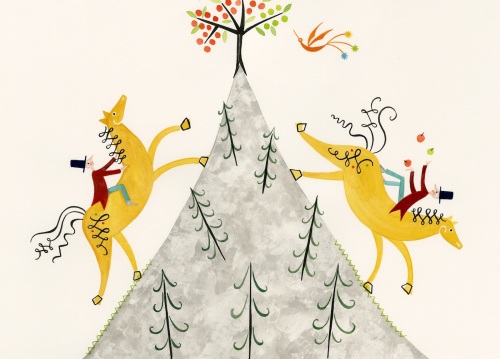 Today is the first day of the Chinese Lunar New Year.
2014 is a Year of the Horse in Chinese astrology.

When I was little I shared a room with my older sister. She told me that after I was asleep a large white horse would fly into our room and take her away, and that if I was awake when it appeared I could go with them.

But I was never able to keep myself awake, and I never got to go.

I believed in that horse. I can still feel how I ached to go on those adventures and to see other worlds. I know what I missed.

Now I read in order to get that feeling of being transported. In some books an alchemy takes place. Suddenly you are not just reading words; you are in another place, another world, another person’s mind. 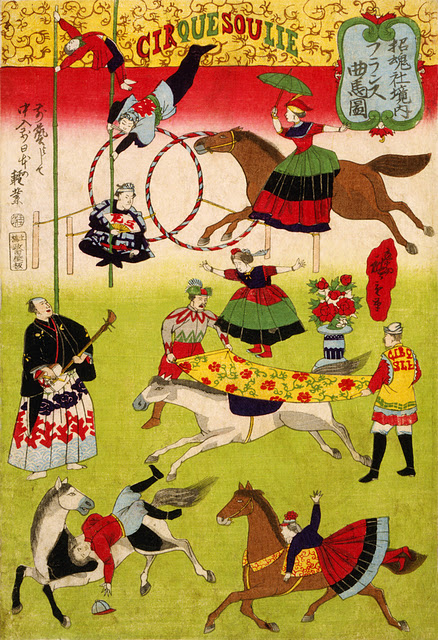 When I pick up a book I always hope that it will have the power to take me somewhere else, and I wait for the moment of lift off – when the world of the book becomes more real than the world around me. Sometimes it happens.

Even after years of reading and some writing I don’t truly understand how it works. Yes, it has to do with language and character, with details that ring true, with plot development and tension. But is also has to do with a flying horse showing up and with being awake enough to take the ride. 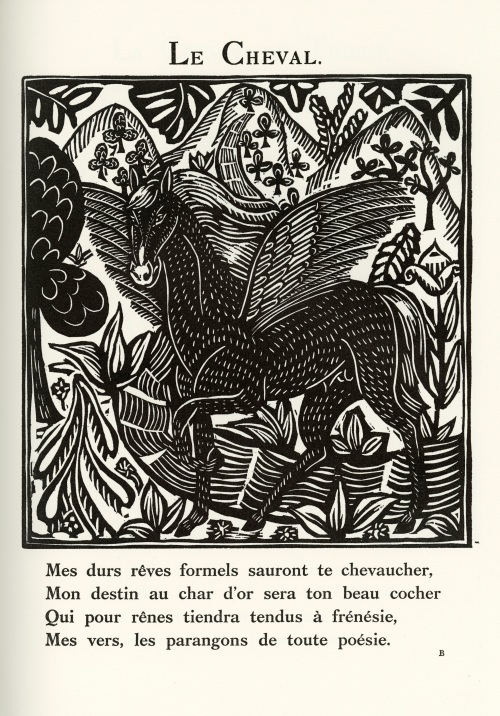 Recently I was lifted away by the collection of O Henry Prize Stories for 2013, especially the stories by Kelly Link and Joan Silber.

In the comments section I welcome your suggestions for books that transported you.
Happy Reading in the Year of the Horse! 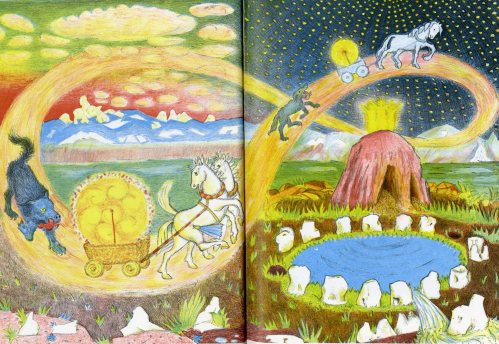 A few weeks ago, Maria Popova published a post in her wonderful Brain Pickings blog featuring the illustrations by Ralph Steadman from a 1972 edition of Lewis Carroll’s Alice In Wonderland.

Before you go any further, read her post. Then come back here. Then go read more of her posts if you haven’t already.

I didn’t know Steadman illustrated Alice In Wonderland, but I should have,  because I own a copy of his Through The Looking Glass, also published in 1972, that I bought on a trip to England in 1975 (Steadman’s Alice In Wonderland is mentioned on the book jacket flap, but what 15-year old reads  jacket copy?). It is one of my Most Valued And Beloved Books. Here are more of my favorite images:

The Jaberwock, with eyes of flame. Steadman is also a political satirist. 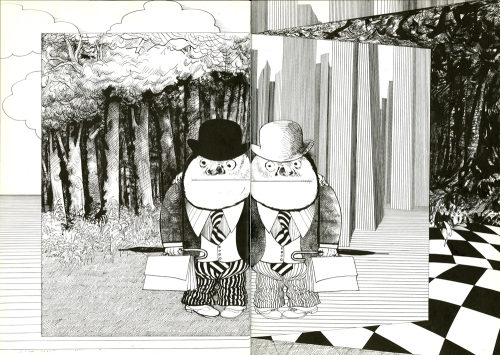 Notice how he uses the gutter split to advantage. Perfect for a story set in a world of reflection. 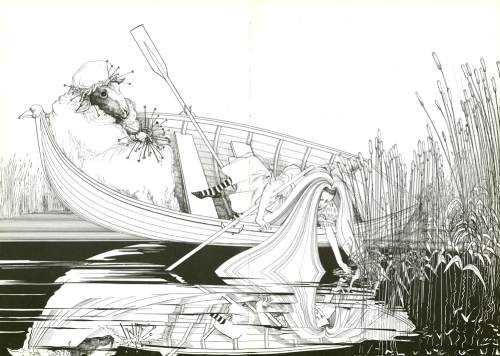 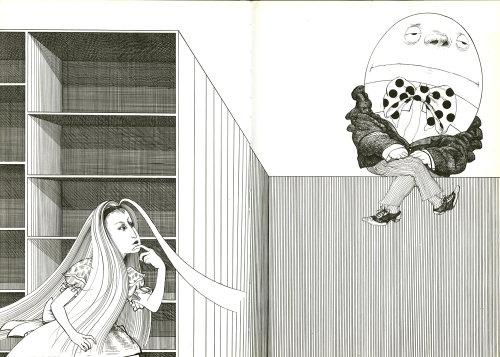 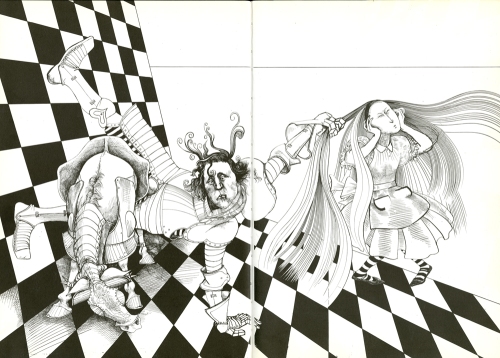 Steadman takes the commonly accepted view that the White Knight is Lewis himself. 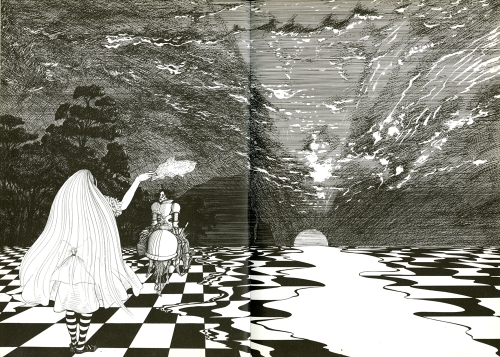 When I was first starting out as an illustrator, nearly thirty years ago, I tried out pen and ink as a medium, a la Steadman. The image below was for The Clinton Street Quarterly, a small publication from the 80s out of Portland, OR. It is humbling to look back that far in my professional history, but take it as a tribute to my love of Steadman’s work. 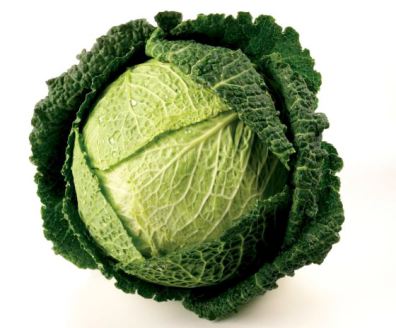 A game of poem-tag started the other day over at Facebook, with friends tagging each other and assigning poets to each other. The only rule? You had to post a poem by your assigned poet. The goal? To blanket Facebook with poetry…and why not? Poetry makes a pretty nice blanket on a brrrrr-ish winter day.

So far, I’ve had two people tag me, one asking for a poem by poet Ruth Stone, the other asking for one by Kay Ryan – lucky me, because I love both those poets. Below I’ve posted the poem I chose by Ruth Stone (“A Cabbage.”) In turn, I’ve asked some Facebook friends to post poems by Linda Bierds, Linda Gregg, Catherine Wing, Steven Kuiisisto and Raymond Carver (yes, he wrote poetry before he ever wrote fiction.)

Though I’m not a huge fan of Facebook (nervous about the way it’s used to track certain things about its users – I’m not attentive to it, not even quite comfortable with it) I do use it to link to my  posts here at Books Around the Table and to my personal blog, The Drift Record. It’s easy to trash Facebook  and say that the “friendships” are artificial, and I suppose they can be. But they can be more, too.

What I like about Facebook is the sense of community it can generate quickly, as is the case with the sudden game of poetry tag or the occasional call for political action. Sure, I have my own friends in my life on a daily basis – my friendship with them has the patina that comes with rubbing elbows over and over. But there are “friends” out there that I’ve never met, friends who share my enthusiasm for a good poem or who ask interesting questions about writing, art, life, whatever.  I don’t care if their friendship comes to me online – that’s fine. Writing can be isolating – and I’m comfortable with my friends arriving via different modes of delivery. I like the connective tissue that gets formed no matter how we meet.

Some of these Internet-only friends are beginning to feel very real – one in Italy I hope to visit some day, another one whose three blogs consistently appeal to me – she’s smart as heck and very energetic, and she loves poetry. I have the feeling we would be good friends if she lived close by – once upon a time that was the only way to become close.

I’ve never met some of the writers who participate in Poetry Friday (hosted by Keri at Keri Recommends this week) but I sometimes find myself thinking “I wish I knew this person,” and I suspect that between the two of us we’ll make that meeting happen. We’ll shake hands at a Writers Conference one day and feel immediately like old friends.

A Facebook friendship is not unlike the relationship that developed between avid reader Helene Hanff and used bookseller Frank Doel (described in Hanff’s book 84 Charing Cross Road – made into a sweet film with Anne Bancroft and Anthony Hopkins.) An ocean separated them, but they were close friends thanks to the letters they exchanged. I do envy them those letters, mostly for the handwriting – I miss handwritten letters. But now it’s keyboards, and the ocean is virtual – and that’s okay with me. Sometimes the aggressiveness of 21st-Century technologies drives me absolutely crazy – everything coming at me too fast, too blurred.  But certain things about it are useful. I spent time reading Ruth Stone and Kay Ryan on Wednesday because of friends on Facebook. I can live with that.

Here’s the poem by Ruth Stone, mentioned above. Hope you like it. It speaks to me in cabbage language.

You have rented an apartment.
You come to this enclosure with physical relief,
your heavy body climbing the stairs in the dark,
the hall bulb burned out, the landlord
of Greek extraction and possibly a fatalist.
In the apartment leaning against one wall,
your daughter’s painting of a large frilled cabbage
against a dark sky with pinpoints of stars.
The eager vegetable, opening itself
as if to eat the air, or speak in cabbage
language of the meanings within meanings;
while the points of stars hide their massive
violence in the dark upper half of the painting.
You can live with this.

Magic Formula: How to Create a Picture Book

This time up, I considered writing an advice column about what to do when you’re waiting for an editor’s response. But then I decided it’s more interesting to look at the work itself: making books. Over my next few blogposts, I plan to lay out a process for creating a picture book, using examples from my published and as-yet unpublished work.

PART ONE: CHARACTER.  Let’s start with character. Good stories need intriguing characters, characters that sparkle with their very own inward and outward expressions of self: looks, mannerisms, substance, personality quirks and out-of-balanced-ness.

My characters are usually an amalgam of people I know, their traits exaggerated and edited for maximum dramatic impact. I am especially interested in duos, for the interaction and conflict possibilities. Also, I think it’s easier to draw animals than people.

Thumbnail sketch of Frank and Izzy.

So, Dear Reader, if you want to play along, start by drawing a favorite animal. You can anthropomorphize a little or a lot. Look through family movies and photos for lively gestures and expressions and try to transfer what you see to your animal. Notice how other illustrators do this. (Paul Schmid, Arnold Lobel, James Marshall to name a few.) Hilary Knight’s Eloise illustrations are great inspiration for childsize action gestures. Another strategy is to google photos of famous duos, (i.e. Lucy and Ethel, George and Gracie Burns, Sonny and Cher…), and try to capture their interaction in your characters.

Rough sketches for future characters based on Ethel and Lucy.

I like to do these sketches on tracing paper. It’s easy to erase and rework. Once I have several pages, I hang them on the wall to consider. I think about proportions. Heads to bodies to legs and arms. Do this and pretty soon you’ll have a rough, generalized look for your characters.

It’s impossible to draw pages of the same characters without starting to sense story bubbling up. Sometimes these ideas come out of “mistakes” in the drawing. For example, maybe the line you’ve drawn for a smile gives the character a devious look. Go with it. Think about what that character is up to. Your mind will start spinning story.

Meanwhile, life goes on. Pay attention. Note overheard conversations that sound like your characters. Keep track of situations that provoke an emotional response in your own life, the funny, scary, sad, annoying, angering stuff. Write down anything that seems made for these little characters you are brewing.

My next turn to blog here will be Feb. 7. Using these preliminary drawings and notes, we’ll move toward constructing the story.

In honor of the new year, which is only three days old, here are some pictures of babies and children.

This is a happy little sculpture from Estremoz, Portugal. Maybe the mother had arms once.

In very old paintings the babies often look peculiar. The face of Duccio’s  baby Jesus face is old, although his feet are young.  The same is true of the Giotto. Why? 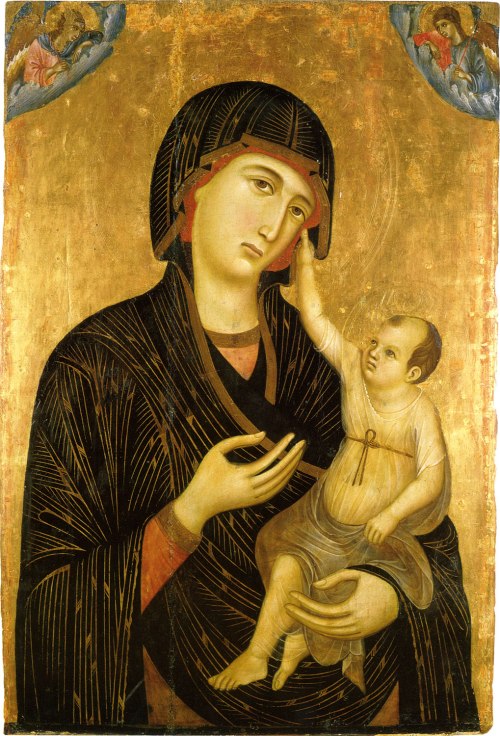 I have read that the babies look old because the society had a different conception of childhood, but this explanation never made sense to me. If you have ideas about this, please leave a comment.

I think that maybe the babies look like the artists looked. Another possibility is that the more detail you put into a face, the older it looks.

I love these awkward children painted by Henri Rousseau.

Why do her legs disappear into the meadow? Did Rousseau just run out of space?

This serene child in red was painted by Ammi Phillips.

When I draw babies I sometimes just do a shorthand baby – real features seem to weigh it down and make it unbaby like.

Simple cartoonish drawings can feel real. Crockett Johnson makes Harold feel real and alive by his body language, even though the few details are odd. 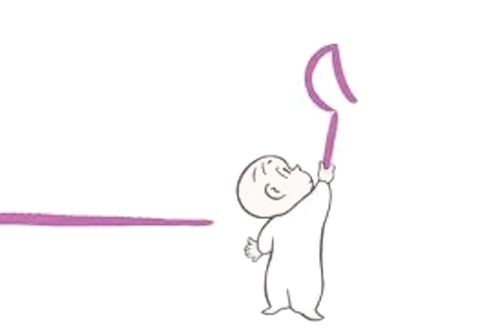 Margaret (Chodos-Irvine) includes very little detail in this baby from Only You, but the body feels just right. You can imagine holding this baby.

Maurice Sendak has lots of detail AND the babies in Outside Over There look like babies. Except that according to the text they are goblins, not babies.

And sometimes babies fly too, as in this devinette.

May you have a Happy New Year, filled with new projects and new hope, and maybe even new babies. (But not flying babies).