This, That and the Other

Darwin, the Novelist? Read on!

No philosophizing this week, and no organized writing advice, since my writing advice usually turns into something akin to instructions for an origami swan: “Relax. Go to a cafe. Listen. Overhear. Read. Play with your dog. Take a walk. Write.” (Steps 1-8, fold here, fold there, then…it’s a swan!)  It’s like my best advice to parents with their first newborn: “Sleep when the baby sleeps and you’ll be okay.” Streamlined and optimistic.

So instead of advice, I’m offering up three links to things that have interested me over the last month. They range a bit far and wide, but winter is not a bad season for the farness-and-wideness of things, is it?

This New Yorker article, written by one of my favorite essayists, Adam Gopnik, about the literary techniques of Charles Darwin. (if you have trouble with the link, the URL is https://www.newyorker.com/magazine/2006/10/23/rewriting-nature )

Not many people explore how Darwin employed novelistic techniques to overcome resistance to his ideas. “He realized that he had to write a completely new kind of story, in a tone that made it seem arrived at; he had to present dynamite as brick, and build a house, only to explode the old foundations. Long-felt speculation had to be presented as close-watched observation, and a general idea about life had to be presented as a sequence of ideas about dogs.”

The reference to dogs is about Darwin’s opening information about the breeding of dogs, a topic that offered his readers a way to understand the concept of change; he used a scale of time and a subject they could easily understand, as opposed to starting point blank with the idea of evolution over millions of years. Start small, start with something clear and plain, draw people in, then go big and challenge their assumptions. Not a bad plan for a cunning novelist.

Gopnik goes on to say, “Darwin really was one of the great natural English prose stylists. He wasn’t a “poet” in that vaguely humane sense of someone who has a nice way with an image; he was a man who knew how to cast his thesis into a succession of incidents, so that action and argument become one. And, as with all good writing, the traces of a lifetime’s struggles for sense and sanity remain on the page. Reading Darwin as a writer shows us a craftsman of enormous resource and a lot of quiet mischief.”

Best moment in the essay, in my opinion: “Of course, the theory of evolution by natural selection would have been true even if it had been scratched in Morse code on the head of a needle. But it would not then be Darwinism: a “view of life,” in its author’s words, not an ideology. (An ideology has axioms and algorithms; a view of life has approaches and approximations.)”

That’s a classic Gopnik line, the theory of evolution scratched in Morse code on the head of a needle. Gad, I love the way he writes.

End result: I’ve put some Darwin on hold at the library. I’ll read it and see where it takes me. Meanwhile, I’m thinking about the writing of poetry being, at heart, the act of cultivating a nice way with an image. I’m thinking about approximation vs. axiom, and about the writer’s desire for sense and sanity, which makes me proud to be a writer (as long as we’re proud of what we do, we can keep going, right?)

Maybe by heading so many directions, I’m procrastinating. Or maybe I’m following a mysterious set of footprints into the forest, and where I end up will be my next poem or my next book….?

Best Poem I Read This Month – Tulips by A.E. Stallings 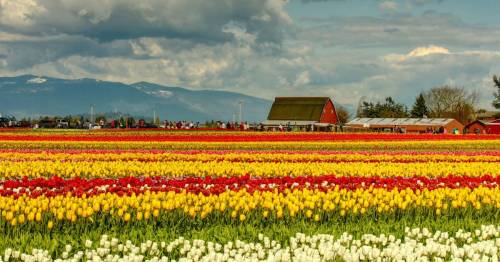 Tulip Fields in the Skagit Valley of Northwest Washington

While snowed-in by what became lovingly known in the neighborhood as “Snowmageddon,” I read a lot of poetry, but this favorite was an easy pick, because I’m longing for tulips.

Who can resist an article about the fur of flying squirrels turning fluorescent pink under ultraviolet lights? Also, information about the vocalization of songbirds. About the art of facial recognition. About space dust on fire. About how “flames have forged our world.”
I’ve written poems about every one of these strange phenomena, all of them inspired by articles in The Smithsonian Magazine, especially articles about science. I’m convinced science is where it’s at for poetry – the imagination engaged not with magical realism but with the marvelous real.
Hope you have some wonderful end-of-winter wanderings. I can feel optimism seeping in. Tulips are coming.

Meanwhile, Back on the Idea Farm

Funny thing, inspiration. Why is it that certain moments catch us up, shimmer, and shout ‘I belong in a story’?

Perhaps we writers are especially attuned to these illuminated bits, but from my unscientific survey of fifth graders at Whittier Elementary in Seattle, it seems most human beings experience times when life expands and reveals some essence to which the only logical response is “that belongs in a story.” Writers are the raccoons who hoard these shiny snippets.

We snap mental photographs that hold story: the guy wearing a baseball hat that has crowfeathers stuck into the mesh like a feathery crown; or our dog’s evening vigil by the gate, her feathers backlit by the sun, as she waits for John’s return. There’s story there.

Other times a story is suggested by a mental auditory clip: The clink of nine pennies dropping into the birthday jar during Sunday morning services at the Little Red Church. The elementary school band tuning up before a rehearsal. A shriek of wind whipping off Puget Sound.

Sometimes I save up overheard pieces of dialogue for inspiration. Like the three little girls playing in the ancient Grove of the Patriarchs on the side of Mount Rainier. “Let’s play castle,” announced one. “I’m blond so I will be the princess.”

Camus said that artists seek to recreate those two or three moments when their souls were first opened. I think that’s just the beginning. We writers constantly collect and recreate moments because they make a good story. We savor vignettes of character, place, dialogue, etc. that help us make sense of the world and ourselves.

Sometimes opening lines seem to drop from the heavens. I save them up. Like: The first time Mama left us she was back the next day.   or  “Darlin’, I wish I could stand between you and the wind.” According to my notes, this is something Eve Bunting’s dad said to her.  or  What’s the worst thing that could happen?

All these glittery bits, some as brief as a single word – ‘snarky,’ ‘hunched,’ ‘snick’ – I gather them in, always attuned for a word that fits into my work-in-progress with a satisfying chink.

Of course names are grist for the storymill, too: Charlie Goodenough, or Stumpy Thompson, Pincherella the crab. Their names deserve stories.

And anecdotes. Like the best friends who glued their hands together with superglue so one couldn’t move away, or the girl who “corrected” her boyfriend’s love letters and sent them back. Both tragic and comedic at the same time. Good stuff.

Of course this is just a beginning of all that inspires. Memories, experiences, research, observations, reading. When I come across an image in a magazine or newspaper that holds a story, I clip it out. Some pictures really are worth a thousand words.

I imagine all these story parts shelved in a high-ceilinged cobwebby hall. Golden light streams in through clerestory windows. Some bits seem to shift on the shelves and suggest themselves for today’s writing. They attract others and start to fit together in a sort of Rubik’s cube. Pieces slide, align, and spark each other.

When I work with material that has that supercharged quality – that “this belongs in a story” quality – I am more likely to fall under the spell of my work, as I hope my reader will be. Those are the best days, right?

Here are some winter haiku from Japan, paired with illustrations from around the world. 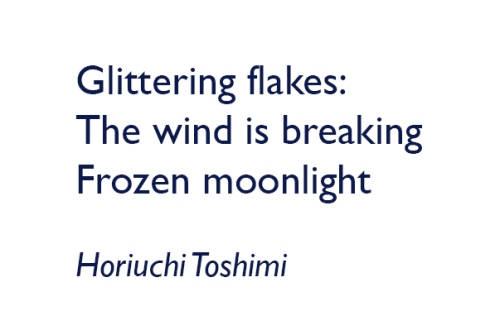 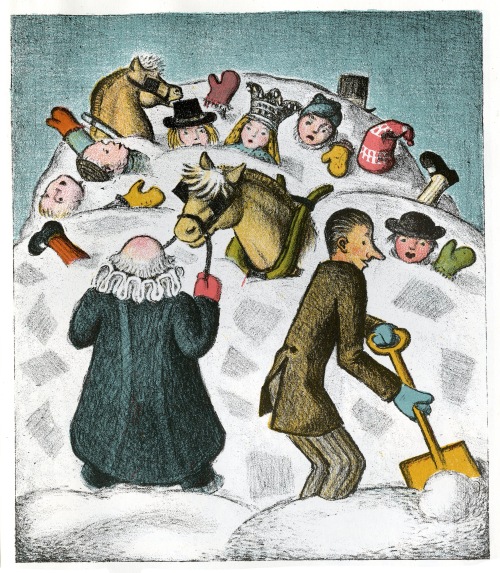 Most of these haiku came from the website Japan Powered. Please click here to read more Winter Haiku.

A traditional haiku has 17 syllables written in 3 lines (5/7/5) often using images from nature. I hope these poems will inspire you to write a winter haiku of your own. If so, please send it in to the comment section! Or send a haiku that someone else wrote that you like.
Here is my attempt.

And here is a winter haiku I saw on a friend’s tee shirt.

Haikus are easy
But sometimes they don’t make sense
Refrigerator

Seattle loves its librarians. We are home to the company that created the librarian action figure, as well as the librarian it’s based on, Nancy Pearl (hey it’s not a stereotype, it’s Nancy!).

But, what town wouldn’t want to host thousands of happy librarians?

I just finished reading Susan Orlean’s The Library Book, which I highly recommend. Reading it gave me hope in the form of the endurance of libraries. They persist all over the world. They survive through war, poverty, fire, technological revolutions.

Going to the library with her mother when Orlean was young left a lasting impression on her. Reading her descriptions of those visits reminded me of going to the Hunt Library in Fullerton with my parents when I was little. The Hunt Library left a lasting impression on me. I could still lead you today to the Dr. Seuss shelf in the picture book section (it was always a mess), and the Greek Mythology books.

The Hunt Library was Norton Simon’s gift to the city of Fullerton. It opened in 1962 next to the Hunt Foods Corporation campus where Simon had made the fortune that funded his art collection. The library was designed by William Pereira, the architect known for the Transamerica Pyramid in San Francisco and the Disneyland Hotel.

Simon exhibited works from his art collection on the Hunt grounds and in the library. I grew up taking it for granted that all libraries had Giacometti sculptures outside and Picasso prints inside (I liked the Giacometti, but I was not impressed by Picasso’s later period works).

In 1964 Simon proposed replacing the library with an art museum, but Fullerton officials turned him down. He went to Pasadena and opened the Norton Simon Museum there instead.

While still on the high of renewed Library Love from reading The Library Book, and believing that libraries will live forever, I learned that The Hunt Library closed its doors in 2013.

Lack of funding. Poor location. Concerns over a growing number of transients.

It is hard to compare my memories of the library with the recent photos.

Last November the library was designated a local historical landmark. It will not be torn down. It may be sold.

Where does a library go when it dies? It becomes a church. Or maybe a homeless shelter. Or a community center. Or an art museum. But it will not be my library ever again.

Dear Hunt Library. You will always be the library closest to my heart, even if you have ceased to exist.