As I get older I get crankier.
By that, I mean more interested in small theaters with moving panoramas- also known as Crankie Boxes.
Like picture books, they tell stories through images as well as words. 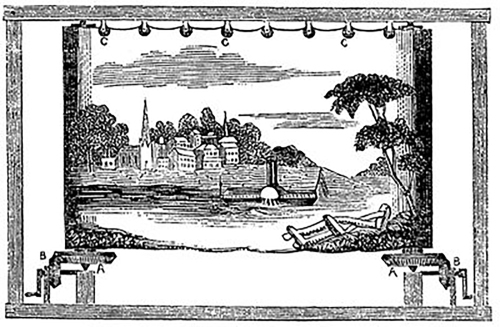 Moving panoramas were popular in the mid 19th century and they ranged in size from small to enormous. 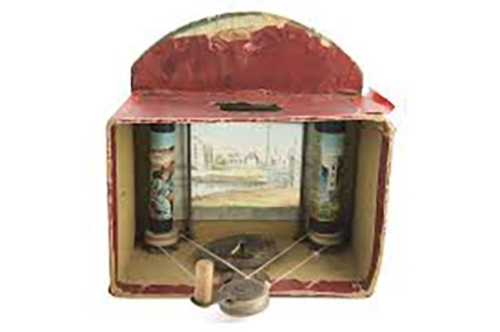 Last October I went with Mare Blocker to a Crankie Fest at the NW Puppet Center. I liked the show so much I went back the next night. Mare and I were both inspired to make crankie boxes of our own.

For information on all things crankie there is an invaluable website – The Crankie Factory. It includes history, videos, instructions on how to make a crankie box and the scrolls. Thank you Sue Truman. thecrankiefactory.com 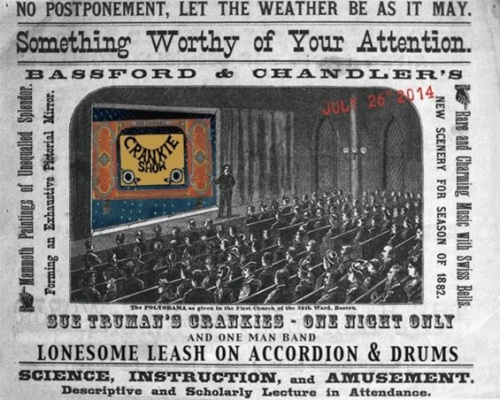 On the Crankie Factory Website were miniature crankies made by Paul Fleischman. Here is a movie. What a wonderful surprise! I have had the privilege of illustrating three of Paul’s books. It is a small and crankie world.

The shows at the Crankie Fest were a combination of moving panoramas and shadow theaters. My niece Zoe visited in October and we experimented with shadow theaters in cardboard boxes.

my witch in the woods

I asked artist and woodworker Michael Zitka if he would build me a real wooden Crankie Box, following the instructions on the Crankie Factory website. A few weeks ago he delivered it. These are the innards.

I cut out a piece of cardboard to show the outside shape and our cat Ruby approved. Mike then cut it out of wood. 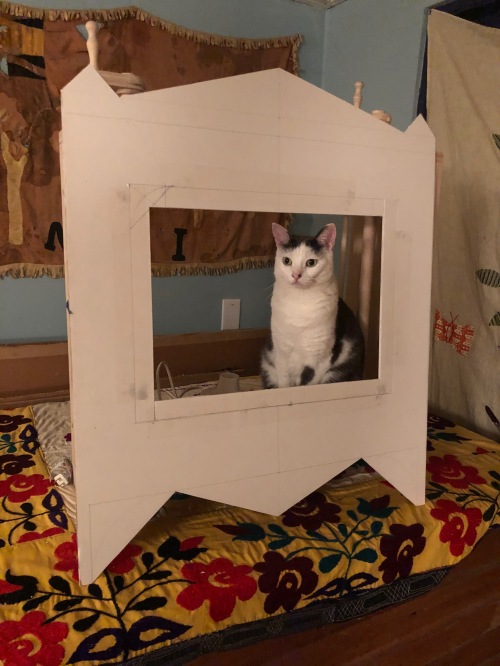 The Crankie is now named, painted and ready for the curtain to go up. Here is the front of Teatro Paprika: 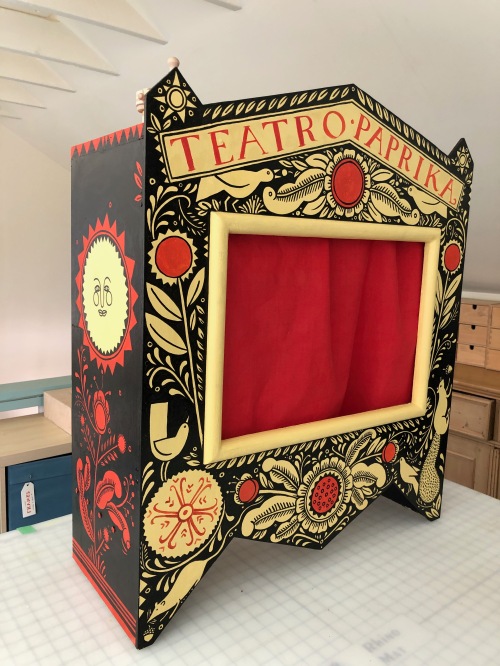 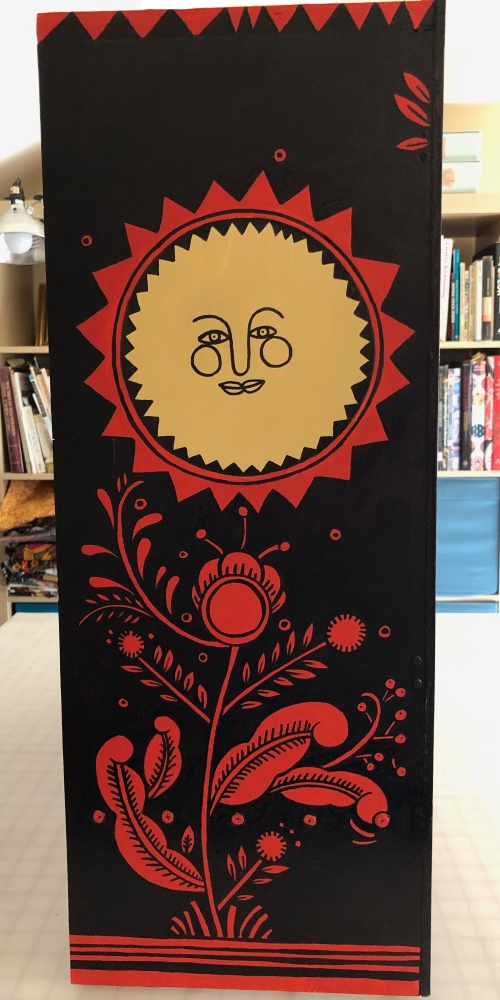 I have the cart and am ready to put a horse in front – I need to get crankin’!

Where Lily Isn’t is here! And we are having a party!

If you live in Seattle, Julie Paschkis and I invite you to come celebrate with us on Thursday, March 12, at 6:30pm at Secret Garden Bookstore. Please bring a picture or anecdote to share about your pet, past or present.

It was two and a half years ago that I had tittery jitters about starting work on the images, and now the book is finally out in the world. Of all the books I have done, this is one of the ones I am most pleased with. It deals with the difficult subject of loss, but really it is a book about the indelible mark love makes on our hearts.

Every Once in Awhile, a Pause

This week I’m going to recommend a movie, and I’m recommending it for a reason that’s a little odd.

The movie is 1917. It’s one of the few movies I’ve gone to a theater to see in the last couple of years, and that’s because I tend to like quiet, small films, easily viewed via DVD. But I’ve always been drawn to books and movies about World War I, and everything about 1917 suggested it was going to be a “big” movie, in need of a big screen.

First impressions were right: it’s a powerful movie, deserving of a big screen, beautifully shot by cinematographer Roger Deakins, and it’s exhausting. Part of my exhaustion was due it being filmed as if it were one long unedited take, the action always driving forward, forward, forward. I was caught up and tense for almost the entire movie. 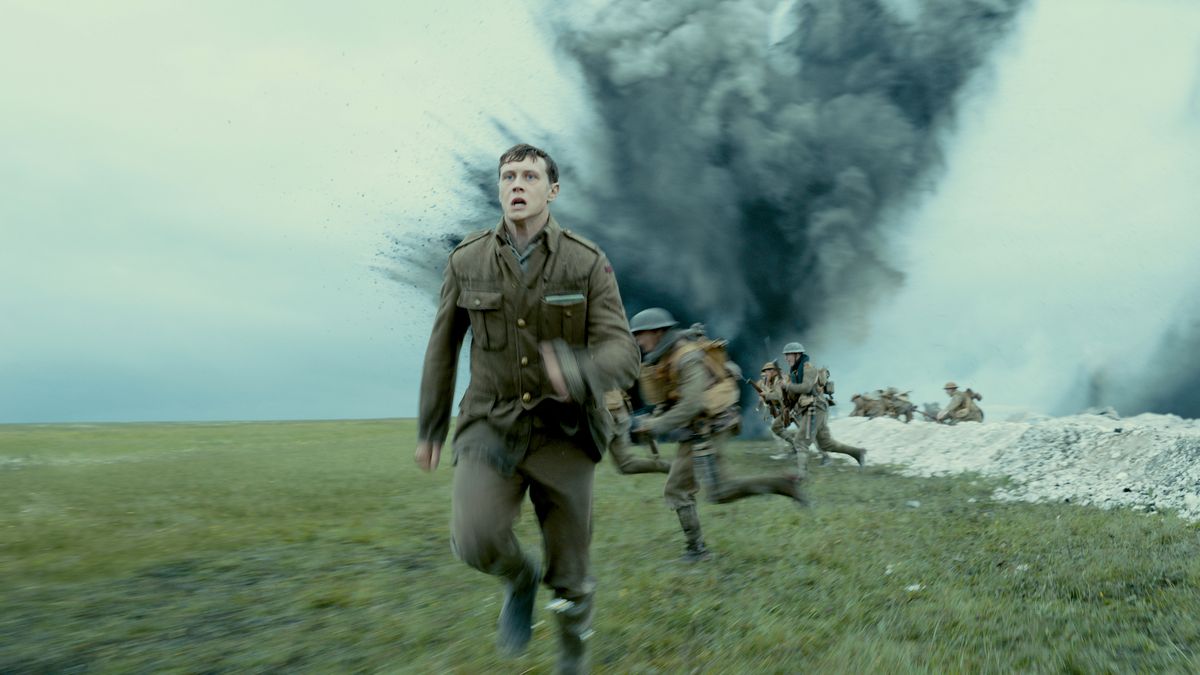 “Almost” – that’s the key word. Because the two scenes I found the most powerful were the quietest, and those are the scenes I want to write about and recommend to you. Those are the scenes that pause and step back from the action for a brief moment. For  writers aiming at page-turners, thinking about constant forward movement, maybe it would it be worthwhile to think about pausing for a quiet moment from time to time.

About half way through the movie, a soldier — desperate to get a message through enemy territory to a battalion of British soldiers on another front line — runs through a burning village in France. German soldiers, feigning a retreat, have destroyed their own ammunition and left the entire village in flames. It’s a scorched earth scenario.

Hoping to escape snipers, the soldier runs into the basement of a building and discovers, in the darkness, a young woman who is caring for someone else’s baby. The woman begs this soldier to stay and comfort both the baby and herself for a moment. Against his better instincts, he draws close to them and begins to recite a poem  – “The Jumblies” by Edward Lear.

An anti-war poem by Edward Lear? The silliest British poet of the 19th century? The soldier delivers this nonsense poem in the most mournful way, and the disturbing music that has accompanied all the running, shooting, exploding, pushing, and pounding scenes of warfare, is silenced. Watching this scene, I could suddenly take a breath. The entire theater audience was stilled.  And I was amazed by the words of a poem I thought I knew thoroughly. 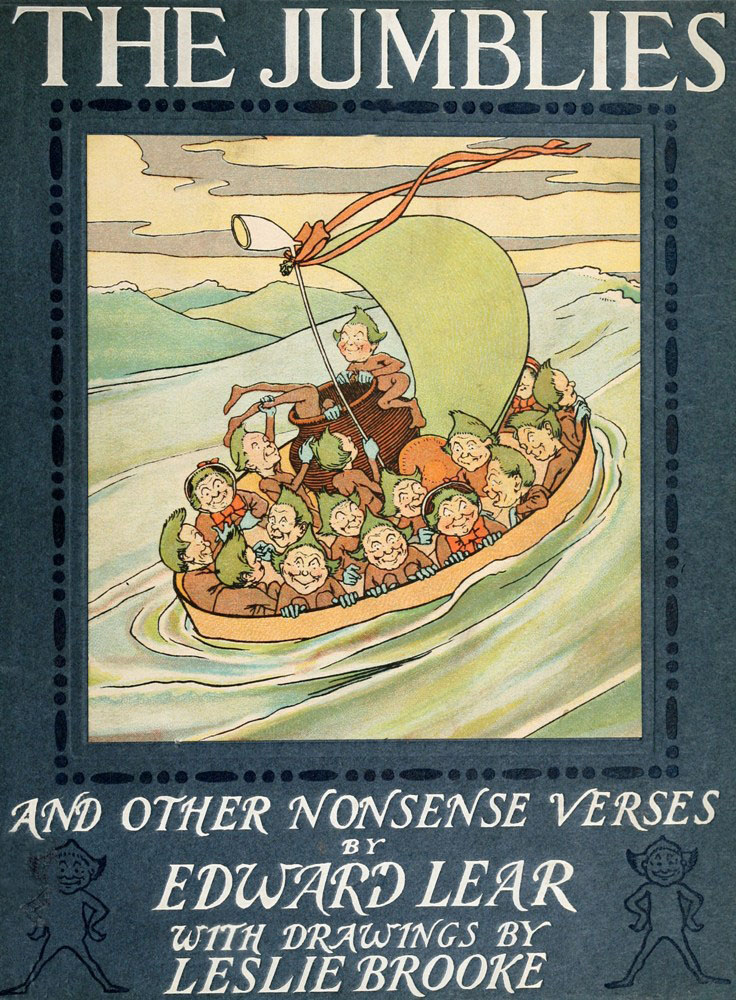 Here is the first verse:

Of course, Lear’s poem deals in nonsense. Sam Mendes, who wrote the script and directed 1917, must believe war is also nonsense —  lethal nonsense.  The Jumblies are going to sea in a sieve, “in spite of all their friends could say,” and they will “all be drowned.” You hear the word “drowned,” but it registers on your heart as “killed.”   The soldier’s recital of the poem — was it only the first stanza? I think so  — is soft, sorrowful and melodic.  The foolish bravura of “we don’t care a button” and “we don’t care a fig!” comes through full force. And then comes the sorrowful refrain: “Far and few, few and far”  which suddenly sounds like a dirge.   The entire poem can be read here.   [ From the second of six verses : “And every one said, who saw them go, / ‘O won’t they be soon upset, you know! / For the sky is dark, and the voyage is long, /And happen what may, it’s extremely wrong’ “]

The second quiet scene is at the end of the movie. The young soldier, not sure of precisely where he is, joins a group of other soldiers listening to a single one among them singing “Wayfaring Stranger.”

Like the audience in the theater, the soldiers are completely silent while they listen, whether it’s because they’re too exhausted to speak or because the words of this song suddenly have a new meaning for them. I could only find one clip of the song scene from the movie, but it will give you a feel for the paused moment. And here is a version that is similar, sung by the wonderful Doc Watson.

I really do hope you’ll see the movie. After all, Sunday the Oscars will be on – 1917 is nominated for Best Picture. In addition, it’s never a mistake to observe what a quiet pause can contribute to a story that moves relentlessly forward.