I have been lucky enough to illustrate two books written by Paul Fleischman: Glass Slipper, Gold Sandal and First Light, First Life. The writing in them is gem-like: much information is compressed into something brilliant. Each word matters. Today Paul is a guest blogger, writing about how the many strands in his writing developed from his life.  The article shows how his writing is infused with more than you notice at first. It’s like a soup broth that has been made of many ingredients. You can no longer see all of the ingredients when the broth is done, but you can taste them. 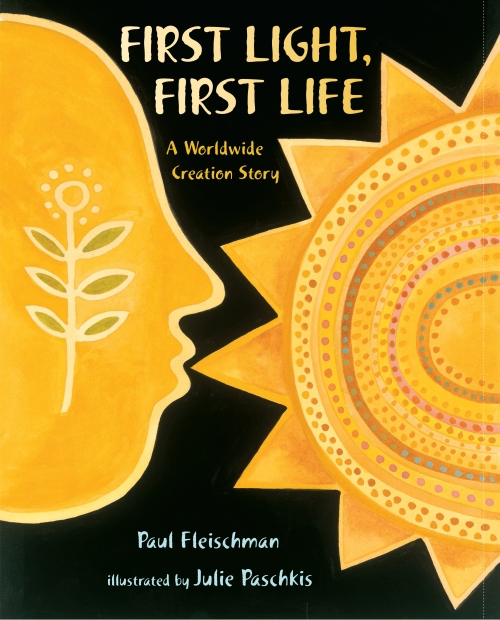 Here is Paul’s essay. For more of his writing go to  www.paulfleischman.net.

With its braiding together of creation motifs from around the world, First Light, First Life might seem to have been rushed into print to counter the nationalism that’s erupted into political life.  If only my crystal ball were that clear.  In truth the book came from far in my past, and all our pasts.

“A man is known least to himself,” wrote Cicero.  The same holds true for our cultures.  Immersed in them, we can’t get an objective view and tend toward thinking they’re universal, or should be.  Many are the societies whose name for themselves means “the people.”  I accepted unthinkingly the white, upper-middle class world of Santa Monica, California that I grew up in.  We were “the people,” our lifeways confirmed by the programs we watched on TV.  Everyone lived in the suburbs, didn’t they?  But then I became aware of alternate possibilities.

They arrived through the air.  At eleven years old, I received a shortwave radio.  Suddenly my world’s boundaries shot outward.  My classmates got their news from Walter Cronkite; I got mine from the BBC, Radio Peking, Radio Australia.  I listened to the latest Beatles hits on KRLA but also to the pulsing, odd-sounding scales of music from the Middle East.  Each station was its country’s chamber of commerce and culture.  I heard programs from Norway in praise of saunas and Radio South Africa’s repeated explanations of the many benefits of apartheid.  English was one tongue among many here.  Listening to languages I didn’t understand showed me the purely musical side of words, something that would inform my writing style decades in the future.  Every house should have a shortwave.

Paul and his shortwave radio

And so it was that in high school I began slipping into churches for the first time in my life and sampling their services.  I watched my neighbors and did what they did, fumbling to find the hymn that was being sung, dropping down onto the kneeler when they did.  The same impulse must have led me to attend my first folk dance.  The small room was packed with college students dancing in lines to music from Bulgaria, Israel, Sweden, French Canada.  The songs were in 4/4 rhythm, then 7/8, then 13/16, some played on instruments I’d never heard.  I knew none of the steps, but I was hooked.

Though I concentrated on English and history in college, I found myself studying mythology and folklore on the side.  I memorized Greek myths, filling the hole left by my secular youth.  I pored over the bizarre customs and religions in The Golden Bough, James George Frazier’s tour of the world we’d all come from.  And then came one of those right-book-at-the-right-time moments: opening Patterns of Culture by the anthropologist Ruth Benedict, a portrait of the differing values encouraged by the consensus-minded Pueblo Indians, the belligerent Dobu of New Guinea, and the reputation-obsessed Kwakiutl of British Columbia.  For the first time I felt I had a view from above of my own society and its heavy weighting toward individualism and competition.

I finished college in multi-cultural Albuquerque.  Living there again years later, I attended the right party at the right time, during which a woman appeared with a loop of string and did the opening move of cat’s cradle.  She held it out to the man beside her and though none of us had played this string game since grammar school, he remembered the next move.  The string came to me.  I was surprised that I remembered as well.  The woman I turned to had grown up in Nepal.  Amazingly, she too knew the next move.  Though we’d come from many places, it was as if we’d had the same childhood.

These many tributaries flowed into Glass Slipper, Gold Sandal, a weaving of Cinderella variants from around the world into a single strand, a testament to diversity as well as the commonality of the human condition.  That book in turn led to First Light, First Life.  Cinderella’s story is folklore, but creation accounts are something more.  Believing or not believing them matters.  What matters for me is the larger truth: that our beliefs vary widely and that the culture around us is only one square in the quilt.  And what a marvelous, many-colored quilt it is.  Children are never too young to learn this.

The same goes for adults.  The urge toward group identity and exclusion of others is strong.  Borders, walls, and cultural superiority have always been an easy sell.  It’s easy as well to see where these lead when stoked: to intolerance, scapegoating, war, genocide.  Gaining altitude and perspective has never been more vital.  Books, like hot air balloons, can lift us above the walls we’ve built around ourselves.  I salute the writers who taught me to see beyond borders, and the teachers who brought me their books.